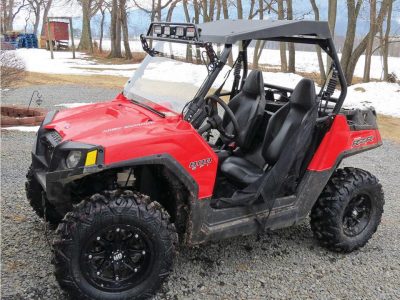 Feb. 27, 2018 – Village of Richfield, WI – The Washington County Sheriff’s Office is investigating the theft of a red 2009 Polaris Razor UTV that was taken from a residence in the 2300 block of Ball Drive in the Village of Richfield.
The UTV has a plow, full windshield and a 2×6 wooden rack on the back designed to hold an ice auger. The unit has both Wisconsin and Wyoming registrations on it.
The owner saw the unit parked outside his home at 10 p.m. on Feb. 24, 2018 and noticed it was missing the following morning.

This same homeowner also previously reported the attempted theft of a generator that was secured in a trailer outside his home earlier in the morning that same day. The homeowner reported hearing his dogs barking between 5 and 5:30 a.m. on Feb. 24, 2018 and the dogs immediately ran after something when let out of the home. The homeowner later observed his generator at the end of his driveway and the lock on the trailer broken.

The theft of the UTV occurred later that night or the following morning.

The sheriff’s office encourages anyone with information to contact our department and also to report any suspicious activity.