May 6, 2019 – Washington Co., WI – Vanya Koepke of Green Bay is the recipient of UWM at Washington County’s 2019 outstanding alumnus award. 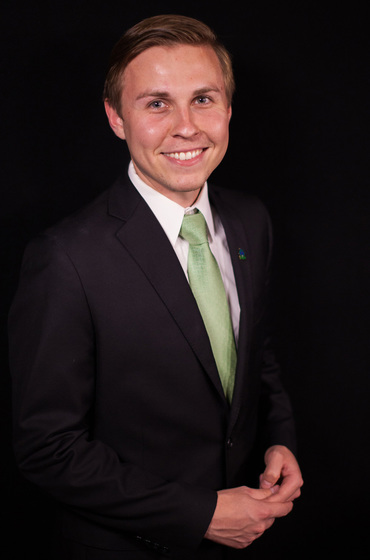 Koepke’s interest in politics blossomed during his two years on the Washington County campus, where he served as a senator, treasurer and president of student government. According to Koepke, the “solid foundation in my general education allowed me to succeed in my major after completing my associate degree at UWM at Washington County.” He transferred to UW-Green Bay, where he continued his leadership role in student government and graduated with a double major in public administration and political science in 2015.

Employed at the headquarters of transportation giant Schneider National for the past three years, his job as senior carrier sales executive includes “sales, training of new associates, and living out Schneider’s core values of safety, integrity, respect and excellence.”

Those core values, a commitment to community service and an enduring interest in politics are what  defines Koepke. In 2018, he received one of 15 young professionals awards by Green Bay Chamber of Commerce and now chairs their Young Professionals’ Ambassador Committee. He is a commissioner on Green Bay’s Police and Fire Commission and a member of the Green Bay Salvation Army Advisory Board and the Howe Community Resource Center Board. He also serves on the alumni board at UW-Green Bay and chairs its scholarship committee. Musically talented, he plays the piano for the worship team at Spring Lake Church in Green Bay.

Despite two unsuccessful attempts in running for Green Bay’s City Council (2016, 2018), his interest in local government has not waned. “While I hope to retire from Schneider (an awesome company), I also hope to run for political office,” he said.

He credits UWM at Washington County for shaping his life in “such a positive direction” due in large part to the “talented and caring faculty and staff that make up the campus.” Koepke is also “thankful for my parents, who adopted me from Russia at the age of 10. Their leap of faith led to my incredibly transformational future.”

Koepke will be recognized at a reception planned for Thursday, May 9, in the campus theater at 6:30 p.m.