July 4, 2019 – West Bend, WI – This original post ran in May 2017 when Lighthouse Lanes was being dismantled and being turned into storage.

May 23, 2017 – Barton, WI – As motorists juggle around the construction on Highway D many are being shuttled past the old Lighthouse Lanes.

In December 2015, Lighthouse Lanes, 7294 Sleepy Hollow Road in the Town of Barton, was sold to Jim Otten, owner of Kettle Moraine Appliance and TV. Otten was in the process of gutting the former bowling alley to turn it into storage for his store across the street.

WashingtonCountyInsider.com took a final walk through.

Inside rows of bottle beer covered the bar area, bowling balls and pins were strewn in the gutters and the mechanical pin setters lay in a pile on the floor.

“We’re stripping it down to sell some of it,” said former owner Tom Zernia. Walking to the far end of the alley Zernia tapped his toe on the lane. “This is synthetic and the original wood lane is underneath; we’ll be selling at $20 a linear foot.”

Zernia said when he owned the place he spent $100,000 putting in new flooring. “I sell this stuff pretty regular for counter tops and work benches.” Zernia now runs Boss Realty. He oversaw the sale of the building for about $245,000.

Records in the Research Center at the Washington County Historical Society have a rather thin timeline on the building on Sleepy Hollow Road. Archives show it dates to the late 1930s when it was a tavern and gas station located along the old Highway 55.

In a back room on Friday afternoon, a couple of heavy metal signs about 3-feet long were found. The signs read ‘Laubenstein.’ Zernia wasn’t quite sure what the signs were used for but he assumed they dated to the 1940s.

Other owners were John Bertram who ran it as Lighthouse Lanes Dance Hall and Art and Edna Sepersky who owned and operated Lighthouse Lanes from 1952 until Art retired in 1982. Art kept on working for his son, Mike who ran the business until the 1990s.

Art Sepersky is quoted as saying “the tower and ballroom were built in 1942, and the building became known as the Lighthouse Ballroom.” Details on the construction of the lighthouse are sketchy. “It was built as an attraction,” said Sepersky. He recalled there used to be 8-foot high neon bowling pins decorating the roof. Wedding dances were held until 1949 when 10 bowling lanes replaced the dance floor. 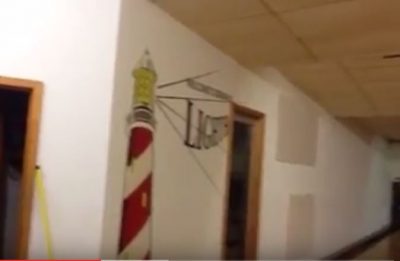 Another ad, dated Dec. 1960 reads, ‘Sal’s Lighthouse Dining Room Complete dinners served daily and Sundays. The address in the ad is Hy 45 N and the phone number is FE 4-5711.

An article on bowling alleys highlighted Lighthouse Lanes. “Opened for business in August of 1950 as a corporation. Art Sepersky was hired as manager in 1951 and became one of five stockholders in 1953. Automatic pinsetters were installed in the mid-50s with more modern ones replacing them in 1968.

Sepersky became sole owner in 1973 after purchasing all the outstanding stock. 1978 saw Mike Sepersky become owner of Lighthouse Lanes, along with his father.