Dec. 27, 2018 – West Bend, WI – You could reach out the window from the projector loft overlooking N. Main Street and come eye-to-eye with the crew from Poblocki Sign Company as it worked in the rain Thursday to remove the sign from the Historic West Bend Theatre.

The crew was in town just after 7 a.m. setting up to take down the iconic sign which weighed about 2,000 pounds.

Orange sparks flew as the team from Poblocki Sign used a rotary power saw to cut the braces holding the sign to the I-beam. 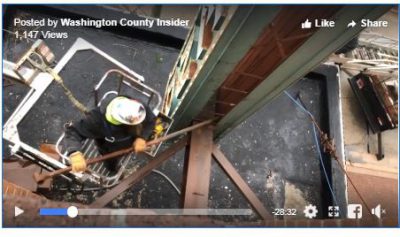 Four cuts later, tethered to the crane above, it sounded like a gong as the sign broke free from its metal support. A little hand wiggle from the crew and the mammoth West Bend Theatre sign was lifted off its frame. 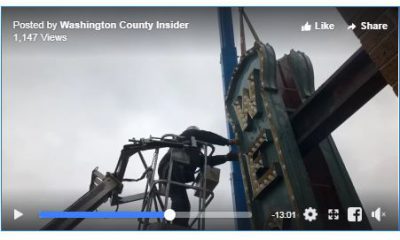 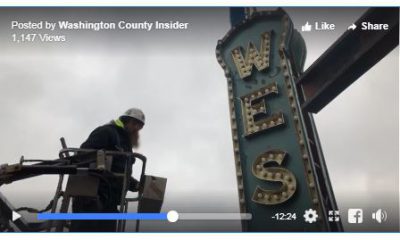 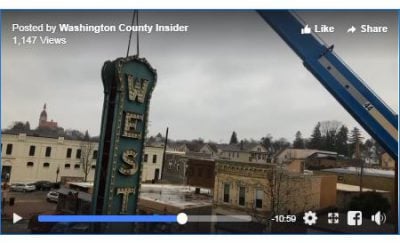 Once airborne the mighty crane moved the sign away from the canopy and the crew below readied it for placement on the flatbed trailer.

While the crew in bucket lifts worked to cut the sign from its base they were careful to not damage the tree branches nearby.

“The most challenging part was laying it down on the truck,” said Haase. “We’ve worked on larger pieces but this one is odd because it’s so old and with rust there was just an element of the unknown.”

Haase said the “I-beam is not in the greatest shape and we’re going to have to address that problem.”

“It went pretty good… nothing drastic happened,” he said.

Over the next few months the sign will be refurbished and then returned to the side of the building later this summer.

During the sign removal, the Historic West Bend Theatre Group received a nice donation from the West Bend Rotary Club. Click HERE to see that presentation.