May 3, 2019 – West Bend, WI – It’s the day before her 100th birthday and Lorraine Wilhelm of West Bend is wondering what all the fuss is about.  She really has no secret about longevity. She can’t understand how the mayor of West Bend knew she had a black belt as a bridge player and she credits her faith for a life full of family, travel, and love.

It was Thursday morning when a troop of well wishers from Washington County rolled into the cafeteria at The Fields building. “We’d like to present this to you from the mayor of West Bend. You get your own day,” said Mari Beth Borek, Samaritan Campus Administrator. 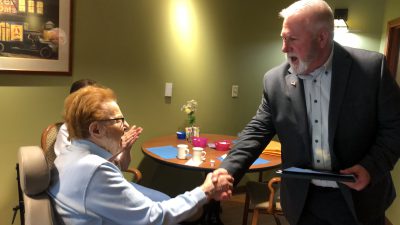 Washington County Board Chairman Don Kriefall also presented Lorraine with a framed plaque. She said she was going to add it to her collection, next to the one from Gov. Tony Evers. “He spelled my name wrong,” said Lorraine.

Honest as the day is long and cheery, she laughed off the error. “I’ve never felt so important in all my life,” she said.

Lorraine was born May 4, 1919 when Woodrow Wilson was President of the United States. Her parents were German immigrants who lived on a potato farm in Antigo and raised seven children. In 1945 when she was 26 years old, Lorraine married decorated WWII veteran Albert Wilhelm. “He fought at the Battle of the Bulge,” said Lorraine. “He froze his feet and was bedridden for a year.” 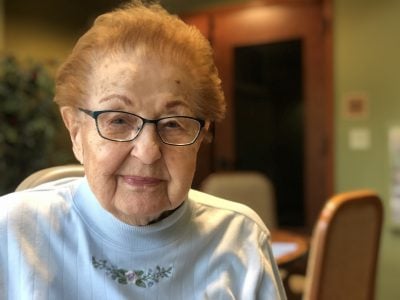 After spending an hour with Lorraine her storytelling became more vivid from travel to dancing and baking and eight grandchildren and 10 great grandchildren. Highlights are below.

-“I was a Life Master at bridge. I made it to the top; I used to play all over the United States. I just loved the game and had such nice partners…. they’re all dead.”

-“I grew up on a potato farm. It was war time and my dad raised potatoes for the Army. The farm was north of Antigo. I had to lift the heavy crates of potatoes onto the wagon. I’m a little, skinny girl lifting those crates; I worked hard. I knew the soldiers wanted potatoes. This is a long time ago. The potatoes were to the top of a big truck. We used to knock the potato bugs off when the potato plants got this high. (she measured about 8 inches). Then we got a paddle and a pail and knocked the bugs into oil. I was about nine or 10 years old.”

-“I started working at Grove Inc. in Grafton. You were happy to have any job just to get some money. Albert was an apprentice in the office and somebody was getting married and he came down in the shop where I was working and he said someone is getting married and asked me to go to the wedding dance with him. I didn’t even know him. Well, that was it. I guess I met the right one. But then he was drafted and in the Army and froze his feet at the Battle of the Bulge but then he kept going to school and finally made vice president of the company.”

-Lorraine and Albert had five children. “I waited for him… after the war. My mother talked me into waiting to get married.” The first two were twin boys named Tom and Jerry. She’s outlived all but two of her children.

-“I didn’t go to school. I went to the eighth grade and then the teacher came out to the farm and told my parents I should go to high school because I was valedictorian in my class but they needed me at home. I was the oldest girl; I had to stay at home and milk cows.”

-“My mother came from Germany and she showed me how to make dumplings, sauerkraut and spareribs. I entered a beef cooking contest for the state of Wisconsin and I came in fifth place. There were 92 contestants and I won half a cow which was valued at $500.”

-“Dancing the waltzes was big. The blue skirt waltz and I still like polkas.” 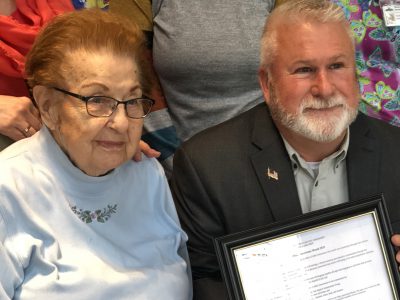 -“My sister Mary Jane and I came to Cedarburg and we worked in the shoe factory and then we didn’t like it there because our hands were always full of polish. Both of us then put our names in for Grove Inc. That was manufacturing but they paid us well and we couldn’t get over it. We were making 75 cents an hour but we got raise after raise.” 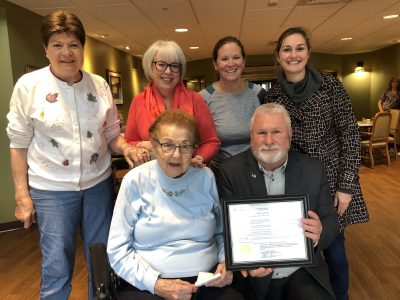 -“I’ve traveled the world. I’ve been to the Vatican twice, I saw where the Holocaust was where the Nazi’s killed the Jews, I’ve been to Bethlehem and many of the European Countries. I was a little old farm girl ‘trutzing’ around Europe.”

-“I went to Switzerland. A man who owned a restaurant south of Milwaukee. I got to be friends with his wife, she owned a dress shop in Cedarburg. They invited us to Switzerland. So we went and drove up over the mountains but I had to take a potato along and hide it. You couldn’t take that into Switzerland. That was the favor he asked. I could have got sentenced for doing that. He showed me how to wrap it so I took one potato and his brother was so happy.”

Lorraine’s family will help her ring in 100 years during a celebration Saturday at the American Legion Hall in Saukville.