Feb. 27, 2018 – West Bend, WI – The church bell sounded as taps played during a military tribute to Bob Pick Jr. The ceremony was help after funeral services for Pick at St. James Episcopal Church in West Bend.

‘On behalf of the President of the United States, the United States Navy, and a grateful Nation, please accept this flag as a symbol of our appreciation for your loved one’s honorable and faithful service.’

“The final morning of Bob’s life played out.  Tributes were given with special reports and Bob’s life was spotlighted. Following day and there were special tributes. His love of sports and his support of high school athletics. His dedication to the West Bend Baseball Association and his by military service in the Navy and how he touched people by his friendliness in the community.

We’re here to commend Bob Pick to God. A community icon to the One who created him.

Those who belong to God through Jesus Christ have the certain promise of eternal life.

God does have a place prepared for us.

Some people have an understanding of God as a great scorekeeper.

God is ready and wanting to wipe away all the bad things if only we repent and ask for forgiveness.

We live for the promise of eternal life.

The grace and mercy of God is what saves us.

We commend Bob to the God who created him. 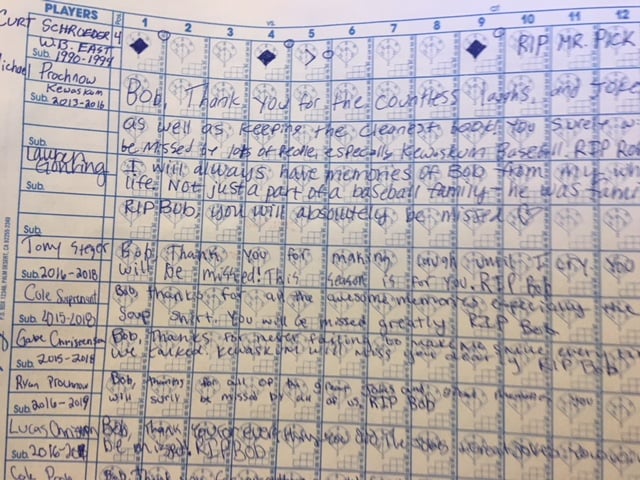 At the end of the visitation coach Doug Gonring stood in the hallway with a pen and one of Pick’s score books. Gonring collected signatures and tributes to Pick Jr. 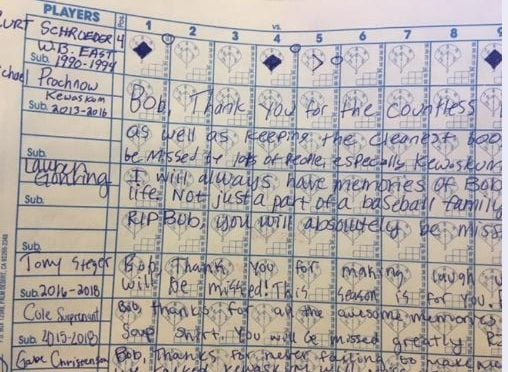 Tony Steger wrote, “Bob, thank you for making me laugh. You will be missed!  This season is for you. RIP Bob.

Gonring said he will leave the book at the ballpark so people can read it and add to the memories of Bob Pick Jr.