Feb. 27, 2018 – West Bend, WI – A Kewaskum father and a West Bend grandfather addressed the West Bend School Board on Monday night with regard to safety and security in the school district.

Former school board president Charlie Hillman addressed the fallout from the Florida shooting saying “when faced with a crisis there is a temptation to act quickly decisively and wrongly. I would like to avoid that here in West Bend.”

Hillman continued, “It seems to me that there is way too much talk about the dollar solutions for school security such as employing armed guards, training teachers to use deadly force, putting up guard towers, barbed wire and even a moat or two.  All of that is expensive and does little to further the goals of the district.
But the good news is that while they argue about this at the state and national levels we can do so much locally. Why? Because in the vast majority of school shootings the killer is known to us. This means there are things we can do at the dime level with judicious use of information, technology an absolute cooperation between the school district, law enforcement and social services.
Let’s imagine that we have Johnny, an 18-year-old senior at West. Everybody knows he’s a troubled boy. Then his mother files for a restraining order against his father.  Red flag, the county knows about this. Then he gets into a fight at school and ends up in an expulsion hearing. Red flag. The school district knows about this. Then the police and encounter him at Regner Park harassing his ex-girlfriend. Red flag. The city knows about this and then a few of his classmates notice increasingly violent posts on social media.  And finally he shows up at Cabela’s to buy a gun. 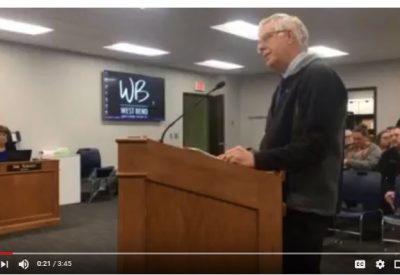 With even a basic integrated information system, those red flags would slow the process and prevent tragedy.