Benefits and/or bonuses for the position have yet to formally be discussed.

Voting NO on the proposed $140,000 salary were: Supervisors Chris Bossert, Frank Carr, Brian Krebs, Richard Bertram, Robert Hartwig, Marcella Bishop, and Marilyn Merten.
Voting in favor of the salary were Supervisors Roger Kist, Chris Jenkins, Mike Bassill, Denis Kelling, William Symicek, Keith Stephan, Russel Brandt, Timothy Michalak, James Burg, John Bulawa, Donald Kriefall, Rock Brandner, Brian Gallitz, Jeffrey Schleif and Carroll Merry.
There were four supervisors absent from the meeting including Kristine Deiss, Joseph Gonnering, Mark McCune and Peter Sorce.
Quite a few supervisors said a salary of $140,000 was needed to attract a well-qualified candidate to run for the position.
Prior to the final vote there were several amendments made to change the salary. The initial motion was to postpone the vote, then a motion to set the pay scale at $114,000 was made by Supervisor Brian Krebs. That was defeated by a vote of 19-3. Those voting to set the pay at $114,000 were Supervisors Brian Krebs, Richard Bertram and Marcella Bishop.
The second amendment was a proposal by Supervisor Bossert to increase the pay to $125,000. That too failed by a vote of 13-9.
Those against were Supervisors Kist, Bassill, Kelling, Symicek, Stephan, Brandt, Michalak, Burg, Bulawa, Kriefall, Gallitz, Schleif and Merry.
Those in favor of the $125,000 were Supervisors Bossert, Jenkins, Carr, Krebs, Bertram, Hartwig, Bishop, Merten, and Bradner.
Some of the discussion between votes included:
Supervisor Tim Michalak – “If you look at what the current administrator is earning, with the bonuses and everything, this is actually quite a cut.” (Chairman Don Kriefall later said the Washington County Administrator is making $190,000 with bonuses and benefits included)
Supervisor Marilyn Merten – “What is this salary proposal based upon? Did we do comparisons with other executives. I have no idea.”
Chairman Don Kriefall – “We looked at what the salaries are within Washington County and we placed initially that that person would be among the top paid in the county. The range for our directors, Health and Human Services is $127,000 to max $149,000. Deputy County administrators $126,000 – $147,000 and so on. So having the leader of the county paid substantially below what the directors are paid would not be fair or equitable.”
Supervisor Buzz Carr – “I’m a little surprised at how this has been presented. With the other elements we had to vote on tonight there was lots of backup material but not with this. There is no backup material on state payment or why our county executive would be the highest paid in the state.”
Supervisor Brian Krebs – “Pay ranges of existing county executives in the state of Wisconsin range from $86,000 a year to $134,000 a year. I’ll argue that some of these salaries have not been adjusted in a while but they are fair market.” 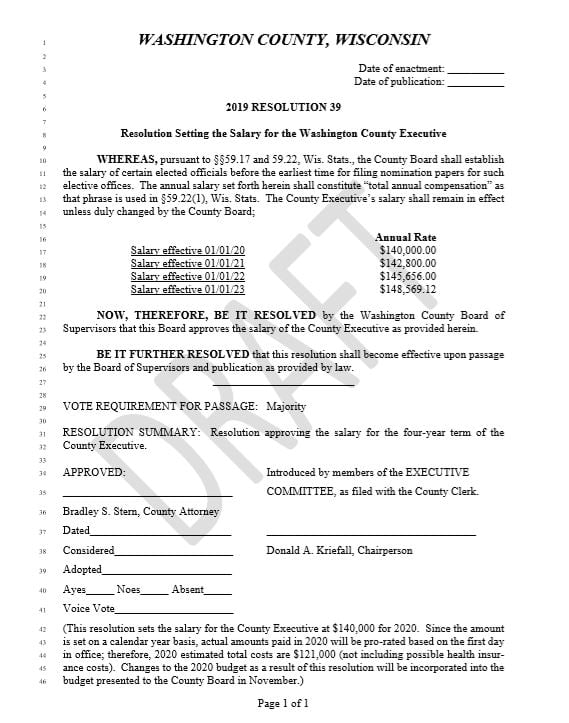 One of the changes in regard to the salary came at the Executive Committee meeting where the committee voted unanimously to drop the annual salary increase for the position.
Under the original draft the pay would have grown by over $2,000 annually and in its fourth year the Washington County executive would have made $148,569.12. Click HERE for details. 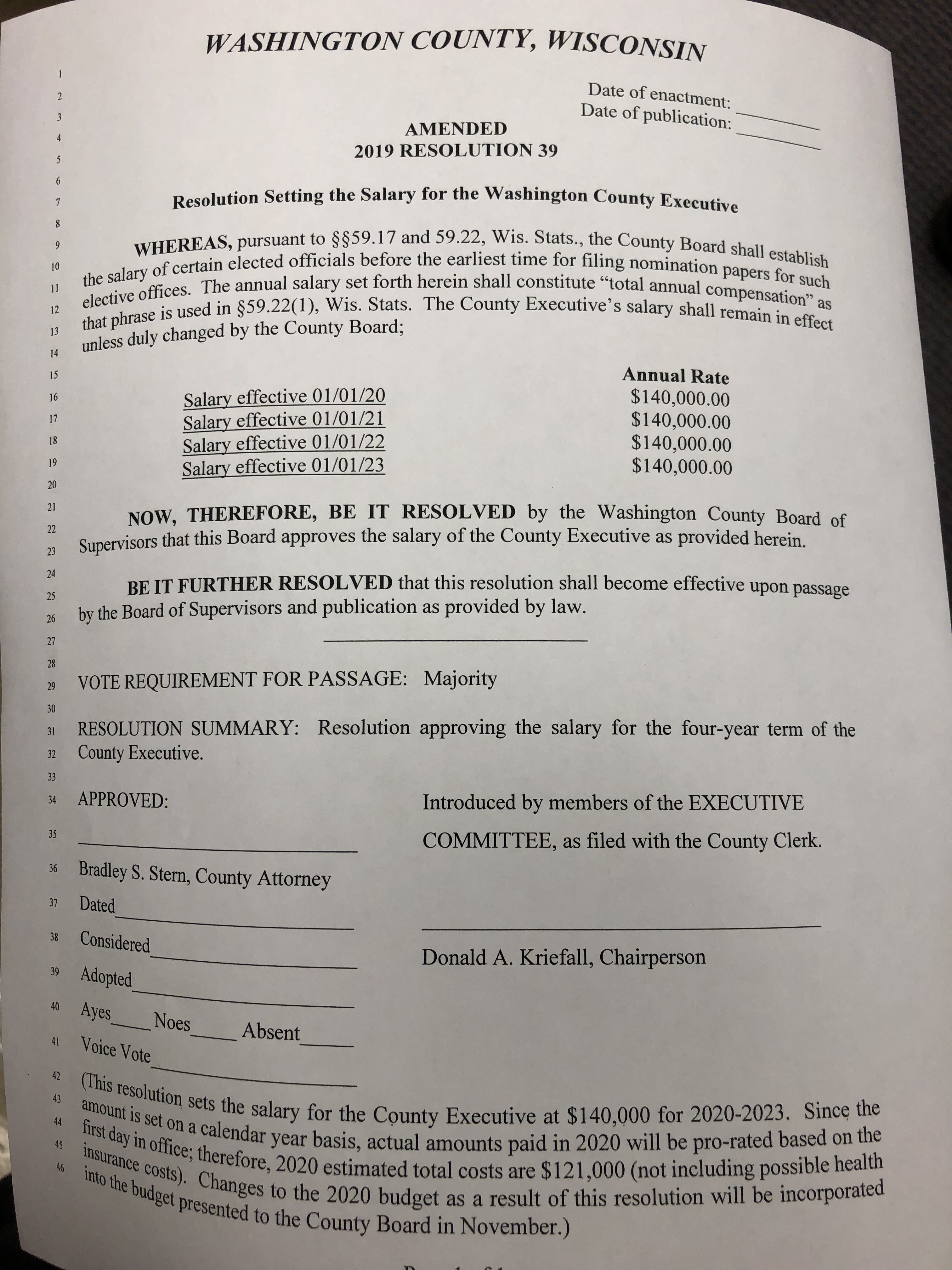 The election for County Executive is set to appear on the April 2020 ballot; if a primary is needed that would be in February 2020.
County Administrator Joshua Schoemann has already filed papers to run for the seat. Declaration of candidacy papers must be filed by January 7, 2020. Candidates must collect a minimum of 500 signatures. Those papers can start being circulated Dec. 1, 2019.

One note, when supervisors voted Sept. 11, 2019 in favor of an elected county executive, the supervisors knowingly violated the terms of the contract signed with Washington County Administrator Josh Schoemann.

A clause in his contract indicates the county will have to pay Schoemann $130,000 because of a violation of the original terms of agreement.