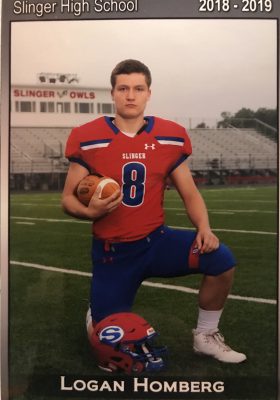 Sept. 27, 2018 – Slinger, WI – Fans of Slinger High School football are trying to rally votes today for Logan Homberg as the PlayInTheDells.com Athlete of the Week.

Homberg is one of five athletes nominated for the week of September 17 through 23.  Click HERE to vote.

Voting is open until Thursday, Sept. 27 at 4 p.m., so be sure to vote for who you feel is most deserving and spread the word. Users may vote once per day.

Kitsa Jordan, Shorewood boys soccer: Jordan helped D3 #1 Shorewood to a 3-0 week. He started the week off with a 4 goal, 1 assist performance in Shorewood’s 6-1 win over South Milwaukee on Monday. He followed that with 1 goal in a 12-0 win over Milwaukee Lutheran on Wednesday, and 1 goal and 1 assist in a 3-0 win over Waukesha North on Friday.

Logan Homberg, Slinger football: Homberg had two rushing touchdowns to help the Slinger Owls to a 37-18 victory over Port Washington. He carried the ball 11 times for 177 yards, resulting in a 16.1 yards per rush average.

Kendra Dantoin, Southern Door girls volleyball: Dantoin recorded 53 kills and 47 digs in the huge Lynn LaPorte SPRAWL this past weekend. Southern Door won Flight 1 in the Qualifier behind that effort. Earlier in the week, Dantoin had 11 kills, 7 aces, and 3 blocks in a 3-1 win over Sevastopol.

WHO IS YOUR CHOICE FOR THE PLAYINTHEDELLS.COM ATHLETE OF THE WEEK?