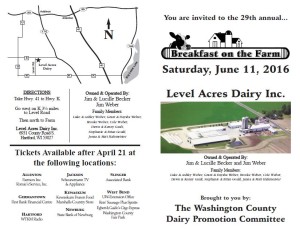 Advance tickets are $6 and children 3 and under are free.

In the mid-1980’s the Wisconsin Milk Marketing Board was born and began reaching out to UW-Extension offices to start Dairy Promotion Committees in their respective counties.

The WMMB (Wisconsin Milk Marketing Board) and Washington County Extension Office sent letters out to individuals of agribusiness and farmers and several people came on board with the idea to promote the dairy industry to the public of Washington County. Washington County had their first Dairy Promotion meeting in 1987 with the help of the WMMB; pursing ideas such as the dairy breakfast.

The committee was headed up by Les Gundrum and his right hand man, Jim Steier. Both men heard many times along the way that this event would not be a success, but they continued forward gathering much of the donations personally and earning the support of the West Bend Radio Station to reach the masses.

1988 marked the first year of Washington County Breakfast on the Farm! Bob and Mary Ihlenfeld graciously volunteered to host the event and that June 1,400 people were served an on farm breakfast and toured their facilities.

In seeing the great success of the breakfast, Mark Pamperin came to Les midway through the breakfast and volunteered his families farm for the 2nd annual breakfast. In 1989 the Pamperin Breakfast on the Farm served 2,200 of Washington Counties finest and the breakfast has been a time honored tradition since.