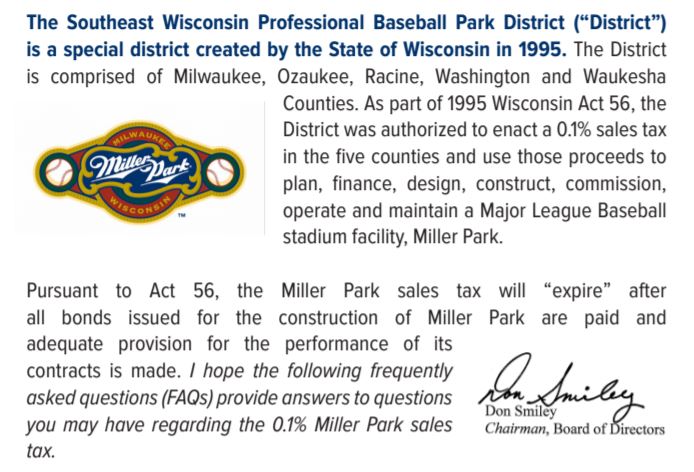 The sales tax would help pay for the construction of Miller Park. That five-county sales tax was promised to end in 2019 or 2020.

“After 23 years, the five-county sales tax that paid for construction of Miller Park in Milwaukee will end March 31, 2020. Members of the board that oversees the Southeast Wisconsin Professional Baseball Park District decided unanimously Tuesday to end the tax. Gov. Tony Evers signed a bill last November to end the tax by Aug. 31. The Milwaukee Journal Sentinel reports the tax has collected about $605 million.”

Last fall, the legislature finally ensured the baseball district would end this tax in 2020. Act 28 was intended to ensure the Department of Revenue could properly sunset the tax.

Washington County taxpayers have waited too long for this tax to sunset and now Madison bureaucrats cannot figure out how to end the tax. Mike Duckett and the Park District Board are trying to do the right thing by returning the money to the taxpayers.

If the Department of Revenue cannot figure out how to properly return the money, first thing next session, legislators should introduce a bill which would require the overpayment returned to the taxpayers of the five counties in the most efficient way possible.

In 2017 the Miller Park District put out a question-and-answer statement:

How much sales tax is collected each year? In 2016, the District received $30 million in sales tax revenues.

Click HERE to read the entire statement by the Miller Park District.