September 4, 2019 – Washington Co., WI – Two men from Shawano County were taken into custody this week on drug trafficking charges after the Washington County Sheriff’s K-9 unit was brought to the scene.

According to the Sheriff’s Department a deputy located two subjects, 31-year-old Steve Friebolin from Clintonville and Jacob Decleene, 25, from Embarrass. The pair were walking on I41 near Hillside Road in the Town of Polk around 7:17 p.m. on Tuesday, Sept. 3. 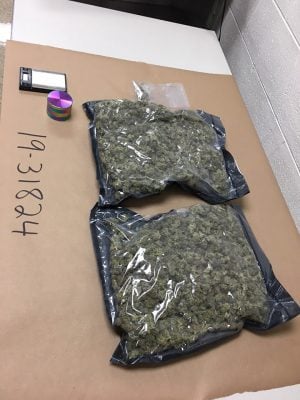 The deputy made arrangements to have a tow truck respond to the scene of their vehicle at the request of the driver.

During the conversation the deputy became suspicious. The K-9 handler and narcotics dog, Ryker, responded to the scene.

Ryker alerted on the vehicle and a search yielded two pounds of marijuana nuggets and other paraphernalia.

Both men were arrested for possession with intent to deliver and are currently in custody at the Washington County Jail.