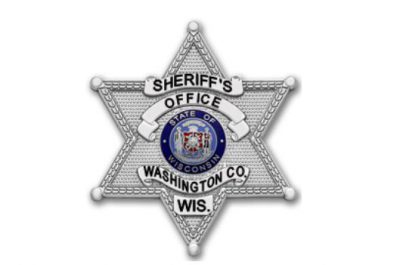 20-26286 – SWAT Call
Saturday morning at 9:20 AM deputies responded to a residence on CTH M in the town of Farmington for a domestic disturbance. A 44-year-old man was reported to be intoxicated and fired a shotgun round off as the girlfriend attempted to leave the residence. When deputies arrived on scene, three additional rounds were shot off. Deputies established a parameter with the assistance of the Wisconsin State Patrol, and the Washington County tactical unit was called to the scene.

Deputies made contact with the subject, who was hiding in the yard, about two hours after the initial 911 call. The subject began to resist arrest and was tased before safely taken into custody. He was taken to the hospital for medical clearance and transported to jail for recklessly endangering safety, going armed while intoxicated, disorderly conduct and resisting arrest.

20-26321 – Dive Call
On Saturday afternoon at 4:44 PM, the Washington County Dive Team was dispatched to the mill pond in the City of Hartford for a male subject that went underwater after attempting to recover a RC boat. At 5:42 PM, the 28-year-old man was pulled from the water by members of the dive team. The man died at the scene.

20-26324 – Rescue call
Saturday evening at 5:06 PM deputies were dispatched to a residence on Kilkee Rd. in the town of Erin regarding an 18-year-old Milwaukee man on a “bad acid trip”. The man was running around naked calling himself “god”. Two deputies arrived on scene and attempted to reason with the subject until the man charged at one of the deputies. The subject was tased, recovered, charged at the deputy again, and was tased a second time. He was taken into custody and transported to Froedtert West Bend where he was medicated. He will face resisting charges.

20-26442 – Assist
On Sunday evening at 9:07 PM a resident on River Ct. in the Town of Trenton reported a shirtless male was pounding on her door. The homeowner sheltered in place and a deputy located a 29-year-old West Bend man whom had been kayaking on the Milwaukee River and fell into the water. He was provided with a ride to Goeden County Park where he was reunited with the other kayakers in his group.

20-26284 Welfare Check
Sheriff deputies were called to Froedtert West Bend on Saturday morning at 8:53 AM for a 27-year-old man that fled the ICU with his IV still in his arm. The subject led deputies on a 1.5 mile foot chase through several fields and barns. The subject ultimately entered a swamp west of Mayfield Rd and north of Pleasant Valley Road and began to refuse commands, kept reaching into his pockets and then assumed a fighting stance. The deputy tased the individual and took him into custody.

20-26350- Welfare Check
At 12:56 AM on Sunday morning sheriff deputies responded to Kwik Trip Richfield regarding a 39-year-old city of West Bend man locked in the family bathroom talking to himself.

The subject came out of the bathroom, lit a cigarette in the store, and then went outside. He took his shirt off and began yelling at the passenger in his vehicle. Deputies made contact and noted indicators of impairment, but the subject passed field sobriety testing. Needles and morphine were located inside the vehicle and he face charges for possession of a schedule II narcotic and possession of drug paraphernalia.

20-26352- Suspicious
While investigating the above call, at 1:59 AM deputies were notified of another suspicious person in the store at Kwik Trip Richfield. Staff stated the male, who was identified as a 29-year-old Madison man, was using their phone to make phone calls, but was actually talking to himself.

The deputy located a handgun on the front seat of the vehicle he arrived in. The male was evasive with deputies and provided a false name. Deputies were able to determine the suspect was involved in a domestic in the city of Madison. He was on probation for armed robbery and had an active arrest warrant. Madison Police also wanted him taken into custody for four counts of battery, disorderly conduct and domestic related strangulation. A search of the vehicle yielded paraphernalia, suspected heroin and cocaine. It was determined the firearm was a facsimile. He was taken to jail.

20-26392 Assist Police Department
Sunday morning at 11:54 PM, a deputy on patrol overheard West Bend Police dispatch officers to a retail theft in progress at Fleet Farm. The two subjects were apparently working together to commit the thefts. The deputy was in the area and observed the subjects walking through the lot and detained them before they were able to get into a vehicle. The deputy then assisted with transporting one of the subjects to West Bend Police Department.