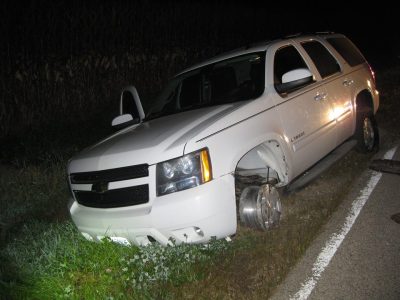 Sept. 18, 2017 – Washington Co., WI – On Sunday at 1:50 a.m. the Washington County Sheriff’s Office received two separate 911 calls relating to a white SUV “all over the road” on CTH NN near Church Drive in the Town of Jackson. The vehicle was last seen by the callers north bound on 18th Avenue from CTH NN.

West Bend Police observed the vehicle on Paradise Drive near Peters Drive in the Town of West Bend and attempted to stop the vehicle based on the Sheriff’s Office request.

A 5-mile pursuit at low speeds began in the southern portion of the Town of West Bend and the northern part of the Town of Polk. The white SUV became stuck in a ditch at 2:13 a.m. after deputies were able to successfully deploy tire deflation devices.

The driver, later identified as a 51-year-old Milwaukee man, refused officer’s commands to exit the vehicle and a standoff ensued after he told deputies, “Come and get me.” He denied having any weapon with him. 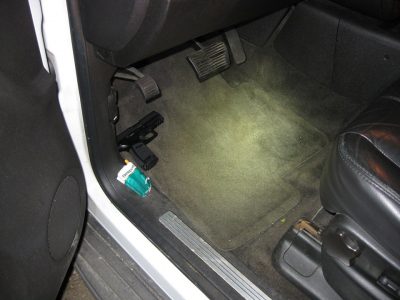 After about 45 minutes of non-compliance, the suspect was able to power out his SUV from the ditch and the pursuit continued. The secondary low-speed pursuit lasted another six miles ending when vehicle went into the ditch again near Mayfield Road south of Pleasant Valley Road and the suspect could not get back out.

The suspect, who once again refused to exit the vehicle, told law enforcement, “This will end in death.”

At 3:23 a.m. the Washington County SWAT Team was summoned to the location. At 4:32 a.m. the suspect was taken into custody using the armored rescue vehicle.

After the arrest investigators located a handgun on the front floorboard and spent casings throughout the vehicle.

Milwaukee Police were subsequently contacted to check on the welfare of the wife who had taken out a restraining order only days prior. Upon arrival at the residence no one would answer the door and empty shell casings were located in the driveway. She was located several hours later ok.

The suspect remains in custody at the Sheriff’s Office on several weapons charges, felony eluding and fourth offense OWI.