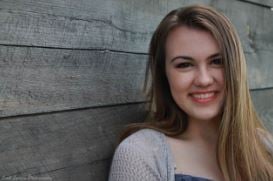 Skidmore made it to the national level and is one of 54 finalists vying for a grand prize of a $30,000 scholarship.

In an effort to further promote academics and athletics at WashingtonCountyInsider.com we asked Quinn to file a couple stories from the road.

She wrote a story Feb. 25 about her “High Hopes at National Competition.”

An entry about how she’s touring Washington D.C. is below.

Today, I visited the United States Holocaust Memorial Museum. While I love having fun on vacation, I think it is important to remember the bad parts of our history and honor those who have died. Never again. 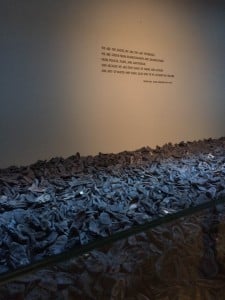 The photo is by Quinn Skidmore. The details below are from Victim’s Shoes at the U.S. Holocaust Memorial Museum

Visitors frequently report that the sight and smell of the 4,000 shoes is the most searing memory from their time in the Permanent Exhibition. Shoes were just one category of belongings the Nazis systematically confiscated from their victims at the killing centers of Bełżec, Sobibór, Treblinka, Chełmno, Majdanek, and Auschwitz-Birkenau. Vast quantities of clothing, eyeglasses, kitchen utensils, hair- and toothbrushes—every kind of personal item—were seized and shipped to Germany or distributed to the local populations. Leather goods, including shoes, were to be repaired by concentration camp prisoners or broken down to be recycled for other purposes.

When Soviet troops liberated the Auschwitz-Birkenau and Majdanek camps, they discovered huge mounds of shoes, hundreds of thousands of pairs, but very few living prisoners. At the sight of these inanimate witnesses, veteran CBS News correspondent Edward R. Murrow commented, “One shoe, two shoes, a dozen shoes, yes. But how can you describe several thousand shoes?”

The 4,000 shoes displayed in the Permanent Exhibition are on loan from the State Museum of Majdanek in Lublin, Poland, and represent a tiny fraction of those found at Majdanek in 1944.

To read more about Quinn Skidmore and her award click the links below.