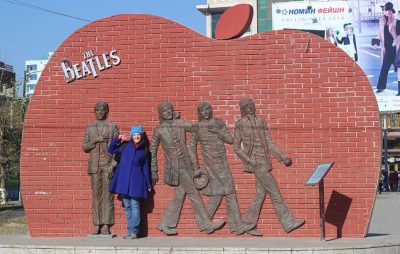 Photo courtesy Posie on the Lamb

Jan. 5, 2018 – West Bend, WI – A 1999 graduate of the West Bend High Schools has one of her stories included in the BBC’s Best of 2017 on bbc.com Travel! The article by Erin Craig also features her husband Sam’s photos.

Erin Craig is on a fabulous adventure writing travel articles for bbc.com, Roads & Kingdoms, Get Lost magazine, and Wanderlust magazine  in countries such as South Korea, Thailand, Mongolia, Myanmar and Vietnam.

Craig is the daughter of John and Ann Marie Craig, owner of Century Farmhouse Soaps and a frequent guest speaker at the Museum of Wisconsin Art.

Recently bbc.com Travel announced its No. 1 story of the year was Erin Craig’s article on Why Genghis Khan’s Tomb can’t be Found.

Sometimes we stopped just for the sake of stopping ‒ Ömnögovi Province, Mongolia, is endless by car. I couldn’t imagine tackling it on a horse.

But this is the country of Genghis Khan, the warrior who conquered the world on horseback. His story is full of kidnappings, bloodshed, love and revenge.

That’s just history. The legend begins with his death.