West Bend, WI – Ten finalists have been named in the search for the 22nd member of the Packers FAN Hall of Fame, and voting is underway for fans to make the selection.

Leo DeGroot of West Bend is one of the finalists. 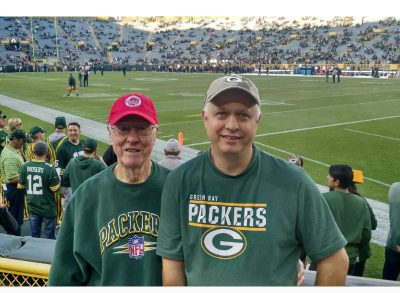 At 88 years young, and as stated on his brick in Lambeau Field, Leo DeGroot remains the “#1 Dad and Packers Backer” to his family. He has lived his life by the words of the great Vince Lombardi: God, Family and the Green Bay Packers.

Dad was originally a baseball fan, but he fell in love with the Packers when his family moved from Calvary to De Pere in 1943. He has always been a rule follower, but one of the few times he was willing to bend the rules, was when he and his high school friends jumped the fence at City Stadium. 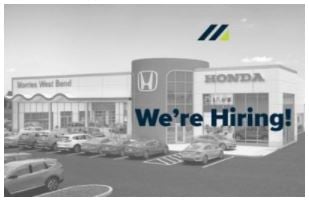 With a twinkle in his eye and a devilish smile on his face, he told us how the security guards made him and his friends sit in the end zone for the entire game. It was no punishment. He got to watch his team.

When the Packers moved to Lambeau Field in 1957, Dad, Uncle Paul and Grandpa purchased season tickets that would become a family legacy. Dad has had the same tickets on the goal line for the last 62 years and has witnessed some of the most iconic games in Packers History. He braved -13 degrees in the Ice Bowl, watched Chester Marcol run his blocked field goal in for a touchdown and saw Majikowski’s “After Further Review.”

Even during the “Dark Days” of the 70’s and 80’s, Dad remained loyal in his love for the Green and Gold. During this time, he added 4 new Packers Backers to the house. If he wasn’t at the game, he was watching it with his family. We would listen to the church sermon, which usually mentioned the Packers, and then rush home to watch pre-game. The only year that Dad wasn’t able to attend a game in person, was when he had open heart surgery. If he could have had it his way, he would have scheduled surgery around football season. Dad’s passion for the Packers was contagious. His kids grew up hearing stories about Starr, Hornung and Kramer. When they were old enough to sit still, the kids started making Packers memories of their own with Dad. Later, it would be the grand kids. Everyone looked forward to their annual game with him and loved to hear the joy in his voice as he told stories of past and present Packers Glory. In 2011 the entire family came together from all over the country to cheer on a Packers Super Bowl win. Dad grinned from ear to ear to share it with those most important to him. Dad became a Packers fan because it was his local team. But he has stayed a Packers Fan because the organization has always put integrity above everything. Like my Dad, the Packers are concerned about the quality of people they bring into their family. Dad does not go to as many games as he used to, but his Packers Pride has never been stronger.

Quote: “WOW! I am shocked, honored, and humbled. Thank you to the Packers for a lifetime of great memories.”

The first professional football team to have a Hall of Fame, the Green Bay Packers enhanced that distinction in 1998 by establishing a Packers FAN Hall of Fame. It was founded for the purpose of annually honoring a devout and longtime Packers fan.

Packers fans were asked to nominate themselves or a friend for the honor with an essay of 500 words or less, accompanied by a photo, explaining why he or she should be recognized. From those nominations, 10 finalists were selected by the Packers FAN Hall of Fame selection committee.

This year’s 10 finalists are:

Beginning Jan. 1, fans can read the finalists’ profiles and vote online by visiting packers.com/fanhof. The winner will be selected by three different groups of people: Packers fans, previous FAN Hall of Fame honorees and the Packers’ committee.

The voting deadline is midnight, Jan. 31, 2020. Voters will be entered into a random drawing to win Packers merchandise.

The honoree’s selection will be announced in February 2020. He or she will receive four club seats to a 2020 Packers home game; a $500 Packers Pro Shop gift certificate; a road trip for two to a 2020 Packers away game, including game tickets, air fare and hotel accommodations; and a one-year subscription to Packer Plus.

The honoree also will have his or her name added to the list of FAN Hall of Fame honorees recognized in the Packers Hall of Fame.