March 27, 2019 – West Bend, WI – The West Bend Park & Rec Commission will review a resolution during its meeting Thursday, March 28 regarding a policy to allow dogs on the Riverwalk. 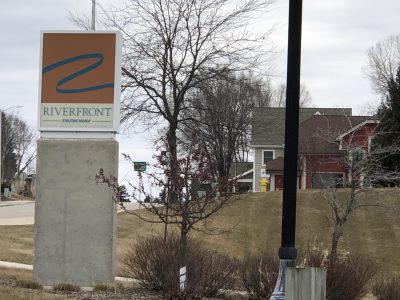 Section 20.07(6)(c) is recreated to read:
(c) Designated On-Leash Dog Areas. Dogs shall be allowed in the following parks, or the designated area within a park, but shall be restrained by a leash with a length of six feet or less.
(1) Ridge Run Park- entire park
(2) Glacier Blue Hills Recreation Area- Ice Age Trail only
(3) West Bend Riverwalk- Sidewalk/Trail portion only
(4) Old Settlers Park- entire park
(5) Vest Pocket Park- Sidewalk portion only

In December 2018 a request was made to allow dogs in the parks. Police Chief Meuler stated his department would be in favor of a policy in which dogs are allowed on the entire stretch of the Riverwalk, on trails only, and that this policy be extended across to the west side of the river, and through sidewalks of Vest Pocket Park and Old Settlers Park.

Commissioners present were also in favor of allowing dogs on a six foot leash, on the marked trails, through the entire length of the Riverwalk, with installation of ample signage. Craig Hoeppner will work with staff to draft a document to bring back to next month’s commission meeting. Policy will also need to be approved by the Common Council. We should be able to have a policy in place for summer of 2019.

The resolution regarding policy for allowing dogs on the Riverwalk will be presented at the 6:30 p.m. meeting in the Council Chambers at West Bend City Hall. The meeting is open to the public.

The West Bend Milwaukee Riverfront Parkway currently runs a continuous 3.1 miles along the Milwaukee River, beginning at River Road and extending northwest to Roosevelt Drive. The Riverwalk, a project of the City of West Bend Park, Recreation & Forestry Department reflects a commitment to protect land along the Milwaukee River Corridor. The Riverwalk offers environments for people to walk, jog, bike, rollerblade, and in winter to snow-shoe and ski. It also offers an opportunity to view the multitude of sculptures which, with the support of the West Bend Friends of Sculpture, dot the landscape along the corridor.

The Riverwalk connects to Regner Park, one of the largest parks in West Bend. Past Regner Park is a ½ mile site that was formerly a Dairy Queen, a home, and a construction landfill. The project was funded with contributions from the City, the West Bend Rotary Waterways Land Foundation, individuals, and grants from DNR and DOT. This particular phase has these interesting site amenities: