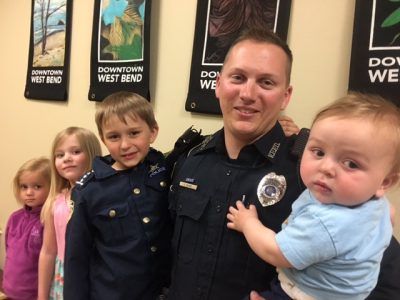 Police Officer Nick Wenzel – Life Saving Award
On July 16, 2016, at 1:10 p.m., West Bend Police Officer Nick Wenzel was off duty in Germantown and stopped at a local gas station. While fueling his vehicle, Officer Wenzel observed a male subject slumped over the steering wheel of a nearby car. Officer Wenzel tried to wake the man and noted he was not breathing. Officer Wenzel immediately attempted to remove the man from the car to provide aid and shouted for a bystander to call 9-1-1. Due to the car’s position against the gas pumps, Officer Wenzel had to enter the subject’s vehicle, placed it into neutral, and push the car away from the pumps so he could access the man. Officer Wenzel removed the man from the car and began performing first aid, including opening the subject’s airway through positioning which allowed the subject to begin breathing on his own. Officer Wenzel placed the man into a recovery position and continued to monitor his breathing until Germantown EMS arrived. The subject was transported to the hospital and made a full recovery. Officer Wenzel’s quick thinking and actions saved this man’s life. 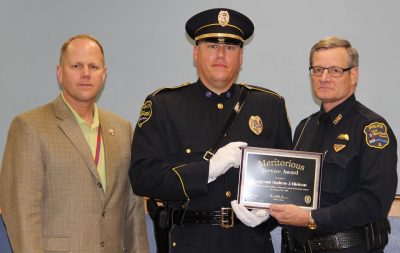 Sergeant Andrew J. Nielsen – Meritorious Service Award
On October 16, 2016, at 3:25 a.m., several West Bend citizens reported the sounds of gunfire in the 200 block of Edgewood Lane in the city. Sergeant Nielsen, Police Officer’s Dopke, Olson, Sanger, and Kriz responded to the area and were attempting to locate the source of the gunshots. As the officers were searching the neighborhood, Sergeant. Nielsen observed a 24-year-old male suddenly exit the rear door of a residence and run aggressively toward Sergeant. Nielsen with a handgun pointed at him. The male pulled the handgun’s trigger while pointing it at Sergeant Nielsen. Fortunately, the weapon misfired. Sergeant Nielsen and Officer Dopke observed the suspect repeatedly racking the slide and pulling the trigger attempting to make the gun fire as he continued moving towards Sergeant Nielsen. Sergeant Nielsen immediately sought cover and warned the other officers to do the same. The subject then retreated into the house.

After more than two hours of negotiations, several witnesses were removed from the residence. After all witnesses were safe, the suspect was safely taken into custody without any use of force by the officers.

Sergeant Nielsen supervised and directed the officers throughout the incident and assisted in peacefully resolving the situation. Sergeant Nielsen showed bravery and ensured this situation was resolved without any injury to the suspect, citizens, or officers. 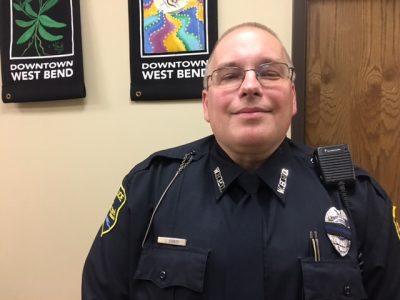 Police Officer Jason W. Donath – Meritorious Service Award
On April 16, 2017, at 1:43 AM, a 24 year old male called the West Bend Police Department and reported that his 22-year-old brother cut him with a sword and threatened him with a gun at their residence in the 1600 block of Hans Street. When police arrived at the scene, the 24-year-old victim was outside the residence. The victim suffered a minor cut to his abdomen from the sword. The 22-year-old actor was in the residence and refused to allow officers entry into the residence and threatened to kill any officers that came into the residence. He sent photos of himself holding a shotgun.

The West Bend Police Department Special Response Team responded to the scene and safely evacuated several neighbors from the area. The man continued to threaten officers and refused to exit the residence. After several attempts, West Bend Police Officer Jason Donath was able to make phone contact with the subject. Officer Donath talked with the man for over two hours before the man finally agreed to exit the residence and turn himself over to police.

The man was arrested for two counts of Recklessly Endangering Safety and Failure to Comply with Officer’s Attempt to Take a Person into Custody. Investigators recovered three handguns, a shotgun, a rifle, and a sword from the residence.

Officer Donath’s actions and negotiation skills helped to resolve this situation without any injury to citizens, officers or the suspect.