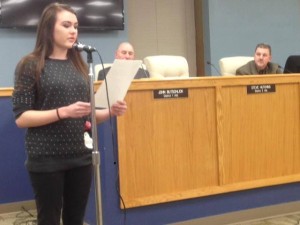 West Bend West High School senior Quinn Skidmore has taken first place in the Voice of Democracy essay contest at the state level and now heads to Washington D.C. at the end of February to complete for the $30,000 scholarship grand prize.
John Kleinmaus with the local VFW Post will be presenting Skidmore and her essay at the January 25, West Bend School Board meeting.
Here is a first-hand look at Kleinmaus’ presentation.

In both contests, students submit essays based on a different theme each year to the local VFW Post. Winners from the local contest then move on to compete at the District level within the State. Only the 1st place winners in each District are then advanced to compete for the State title. The 1st place state winner in each contest then competes for the National Grand prize against all the other state winners.

Locally, our VFW in West Bend has been involved with these contests for many years. I became the local chairman for our VFW Post in 2004. Since that time, there have been literally over 2,000 students that have entered the contests, many of whom competed in multiple years.

In 2010, a 7th grade student from Badge Middle School wrote an essay based on the theme “Does Patriotism Still Matter”. That student and that essay was the top essay at our Post. At the District competition, that essay was again the top essay. Then competing at the State level, that student and that essay finished in 3rd Place. That is the highest finish ever for any student sponsored by our local VFW since I became the chairman.

Quinn Skidmore, now a senior at West Bend West, entered the Voice of Democracy contest this year and submitted an essay based on the theme “My Vision for America”. Her essay not only finished first at the Post level but also finished first in the District. Competing against all the other VFW Districts in Wisconsin, Quinn’s essay, “My Vision for America” finished in 1st place with the top essay in the State of Wisconsin.

In just a few weeks, Quinn Skidmore will be heading to Washington D.C. to represent the State of Wisconsin and our city in order to complete against every other State in the nation for the grand prize of $30,000 scholarship. Congratulations to Quinn.