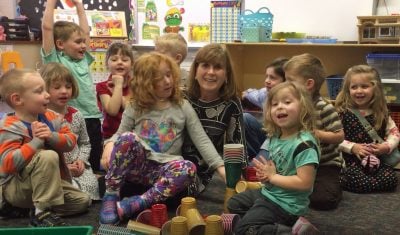 March 14, 2017 – West Bend, WI – When you think about K4 at Cabrini, you probably think of Mrs. Pat Kraemer. And for good reason. She was our very first K4 teacher, back in 1993. She was given a budget, planned the curriculum, bought all the equipment needed for the year, picked out the tables and tiny chairs the students would use, and the toys and games they would play with up in the Ed Center building. It was a lot of fun, “kind of like Christmas.” And she’s been teaching K4 ever since.

Previous article19 year old killed while walking on Hwy 33 in neighboring Dodge County
Next articleTwo players from KML and one from Kewaskum named to East Central All-Conference Team. By Jacob Moeller