March 30, 2017 – West Bend, WI – The 2017 Amazing Ride for Alzheimer’s is in full swing. Fundraising has begun and I’m laying out this year’s tour jersey in short order.

This year the destination will be pedaling the Netherlands for three weeks. I’m currently on a rather intense speaking circuit – spreading the word about the tour.

Currently I’m looking for sponsorship by businesses and organizations. The payback is your business logo on my tour jersey and webpage (imthebikewriter.blogspot.com), a weekly post card from the road, and I’ll participate in a speaking engagement at your business or organization.

I’ll also be riding in tribute to someone each day. It’s a simple $100 donation and I need a jpeg photo of the person I’m riding for.

The sponsorship rate sheet is below. The story that follows is a bit of an explanation about how Alzheimer’s has affected my family and the power of music, exercise and (what I call) rummage-sale therapy.

Thanks in advance for your support!  Deadline for sponsorship is April 8, 2017!

Music, exercise and rummage therapy are my Rx secrets for Alzheimer’s 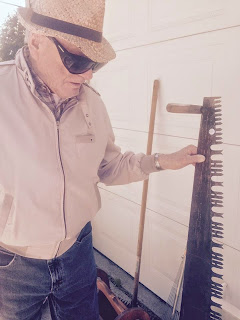 Took my dad to Kewaskum today for its Village-wide rummage sale. My father is 91 and suffers Alzheimer’s. He is mighty fit and farm strong. When he’s dressed up (normally for a funeral of someone younger) people say, “Al looks like he’s ready to start a corporation.”

His appearance is deceiving; my dad is adrift in Alzheimer’s in a well-preserved body. His world resets every three seconds. Memory is definitely an issue with repetitive questions, no sense of a current timeline and you can’t say, “Do you remember this or that” … because, no…. he doesn’t.

I found he responds well to music and exercise. Rummage sales are also good therapy. We always used to go to sales together on Saturday morning.

I find it’s a good opportunity to drift back into his era – because I know he’s never going to be able to step into mine.

At the sales we gravitate to hardware, tools and farm equipment. “What’s this,” I said holding up a carpentry thingamajig. “That’s a planer,” he said. My dad was a Mr. Fix It in his prime. “How about that,” I said. “It’s a horse collar you’d put it over the back of the horses neck……” And there he goes …. it’s more words than we’ve heard in a week.

A couple of things about the disease – my dad doesn’t initiate conversation and when we walk from sale to sale he follows about five paces behind. I’m told that’s normal for someone with Alzheimer’s. 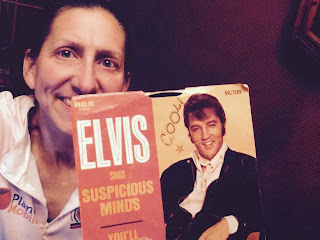 Getting out of the car my dad turned to me. The look in his eye is very distant. I ask if he was feeling OK and after somewhat of a pause he said, “You owe me 57 cents.”

I consider it a miracle. That was more than a half hour ago…. from a guy who can’t remember three seconds ago. I laughed. It’s a sign – – the rummage therapy works.

I think I’ll keep my dad on the hook with that 57 cents… at least for a bit. Selfishly, maybe he’ll stay around a little while longer.