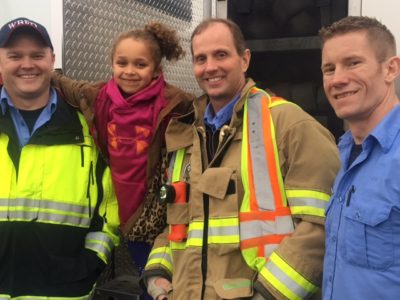 March 1, 2017 – West Bend, WI – The keen eye of a 7 year old helped save the day this week as Serenity Sunde spotted a fire atop the former Badger Car Wash on W. Washington Street.

“I was driving with my uncle and he was going to get some papers and I saw the light and knew it was probably a fire,” she said of the red flames.

The second grader from McLane Elementary School said it took a bit to convince her uncle what she saw was real. “He was driving away and I started crying and saying he had to go back and check,” Sunde said. “I was crying because I didn’t want anybody to be hurt.”

The pair turned around, drove in, saw the fire and started beeping the horn.

Sunde’s uncle left the vehicle and helped pull scaffolding over so an attendant at the car wash could climb up to the roof and use a fire extinguisher to put out the fire.

By the time fire crews arrive on scene the fire was out. 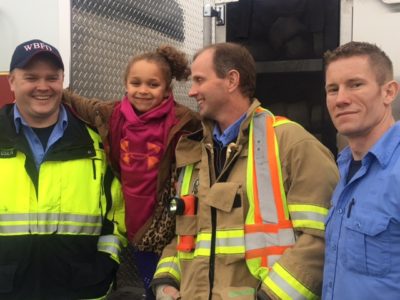 On Tuesday a number of West Bend firefighters gathered outside the car wash to meet Sunde and hear her story.

Dressed in yellow turnout gear the firefighters listened to what Sunde learned in class about fire safety.

“We learn stop, drop and roll if you have a fire on you and if there’s a in your house crawl on your knees or how low you can get,” she said. “If one door is blocked and you don’t have any more doors go through a window.”

Sunde’s aunt Becca Steines said she was extremely of her niece. “We have discussed fire safety in our house and I told her I was proud she could recognize an emergency and knew she had to tell an adult,” said Steines.

Firefighters praised Sunde for being in the right place at the right time.  “For a 7 year old to be that alert and to even be that cognizant to see a fire and know it’s bad ….. that’s pretty special,” said Lt. Alan Hefter. “So somebody really trained her well.”

The fire occurred late Monday afternoon. The amount of damage was undetermined and the cause of the fire remains under investigation.