November 18, 2019 – Washington Co., WI – The April 7, 2020 Spring Election is still a ways away however local elected officials are making some key decisions on whether they’ll be vying for their seat or stepping aside. 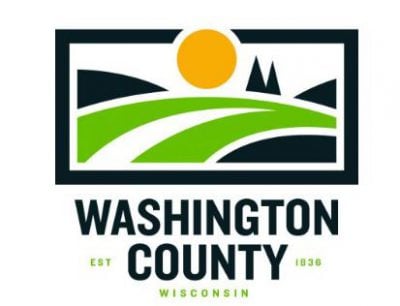 Dist. 9 Supervisor Richard Bertram who represents the Town of Barton. Bertram turned in non-candidacy papers on Nov. 11, 2019. He will finish out his current term but not run for reelection. 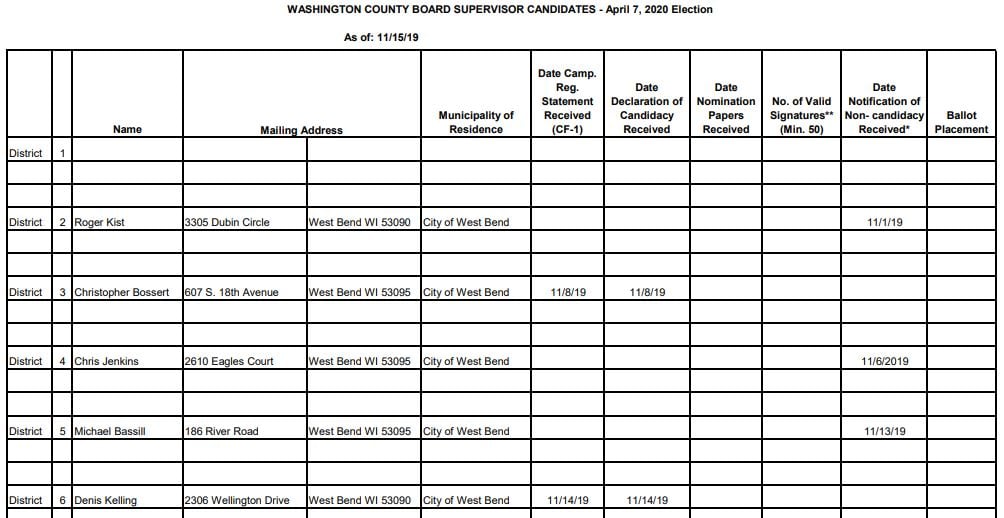 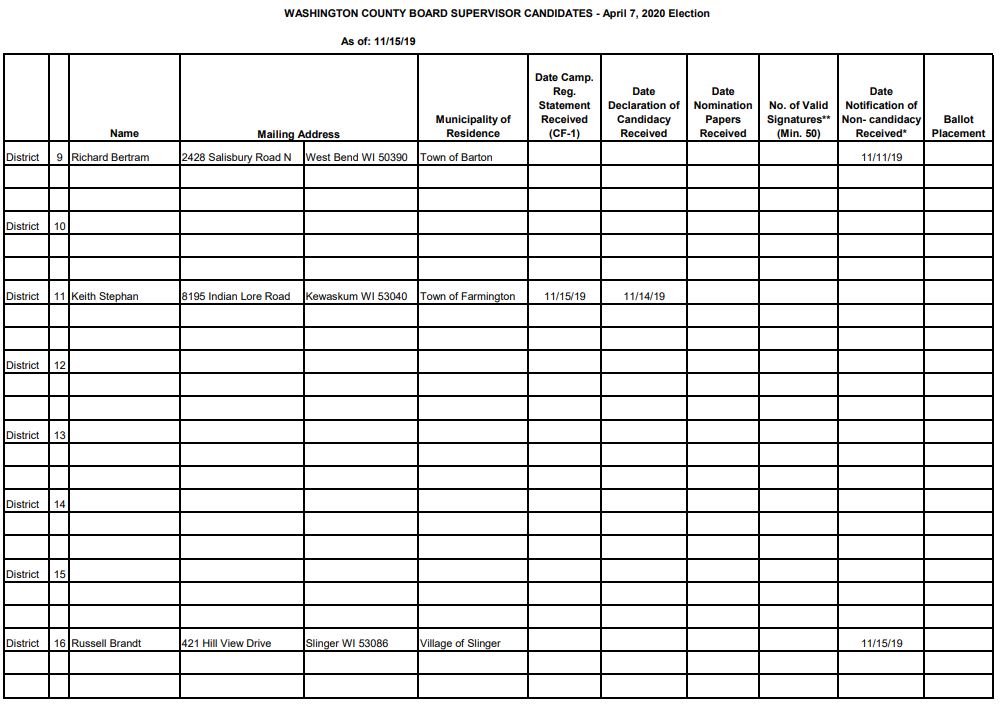 As of Nov. 13 there were others who filed papers with the Washington County Clerk to run for office.

Dist. 19 has a candidate as Todd Bultman filed to run. That seat is held by outgoing Supervisor Bulawa. In February 2019 Bultman ran for city council in Hartford. Click HERE to read more.

Dist. 20 also has a candidate in Jeffrey Millikin. He is currently a Supervisor on the Erin Town Board where he sits on several committees including the Veterans Memorial Committee, Road Commission and the Parade Committee.

Dist. 11 Keith Stephan filed to run again. He represents the Town of Farmington.

Candidates have until December 27, 2019 by 5 p.m. to file a certificate of non-candidacy if they do not plan to run in April 2020.
Candidates who are running may begin circulating papers to collect signatures on December 1, 2019. Those signatures must be turned in by 5 p.m. on January 7, 2020.
Candidates running for Washington County Board Supervisor must submit 50 -100 signatures and candidates running for County Executive must submit 500 – 1000 signatures.
Two people are currently vying for the newly elected county executive post in Washington County: Joshua Schoemann and Adam Gitter.
It was Sept. 11, 2019 when the Washington County Board voted a second time to switch from a hired county administrator to an elected county executive. Click HERE for the story.
Also note, the Executive Committee met Nov. 13 to discuss the wards and municipalities inside the county districts. 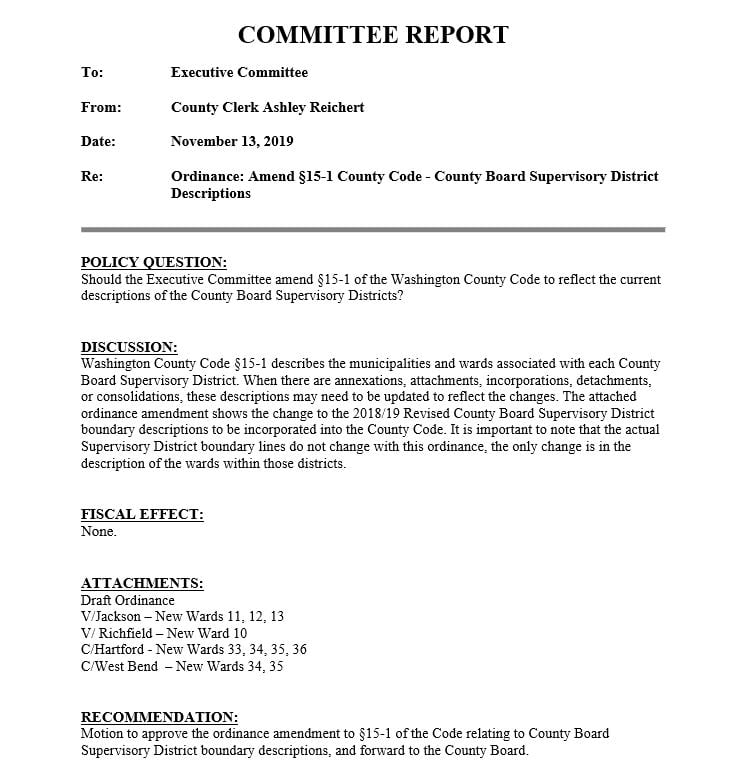 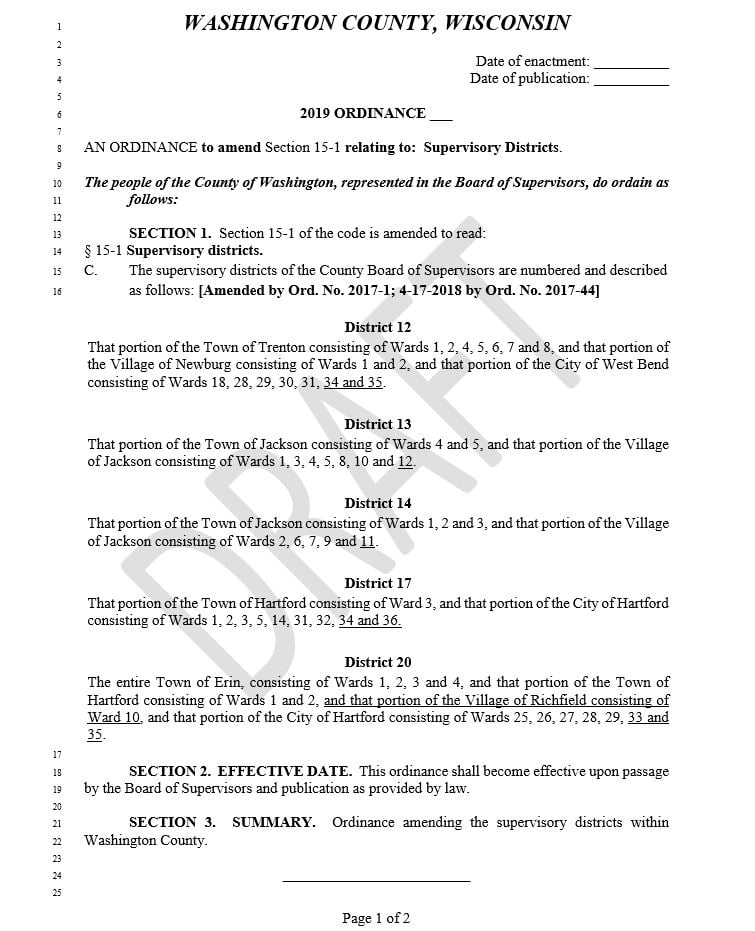 For the city council, aldermen need to submit 20-40 signatures from people in their district. Mayoral candidates must submit 200-400 signatures to run for office.
As of Tuesday, Nov. 12 Dist. 7 alderman Justice Madl filed papers to run again for West Bend city council.
On Oct. 17, WashingtonCountyInsider.com posted a story about Dist. 5 alderman Rich Kasten announcing he would run for mayor in the City of West Bend. Click HERE for the story.