August 13, 2017 – Iron Ridge, WI – An update on that large barn fire that occurred Saturday evening and forced officials to shut down Highway 33.
Neighbors said you could see the thick, black smoke for miles and multiple fire departments were called to the scene as a 200 foot storage building  went up in flames. 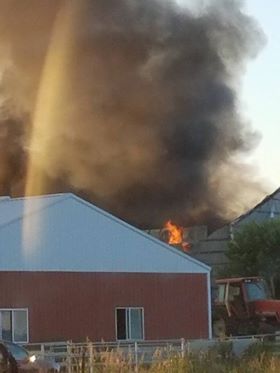 Contents included large bales of hale and straw and one fairly new combine; all were lost in the blaze.
The fire was in the Iron Ridge area at W1894 WI-33. 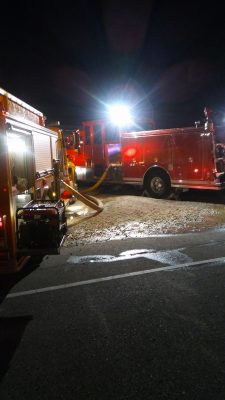 Those responding to assist Iron Ridge were: Theresa, Kekoskee, Knowles, Mayville, Horicon, Juneau, Hustisford, Neosho, Woodland Fire Department, Hartford fire and rescue [including an ambulance] and Allenton Fire along with ambulance.
In all 13 water tenders were used to transport water to the scene from two different fill sites.
The cause of the fire remains under investigation. No injuries were reported.
Photos courtesy Davey Jacak, Ron Naab and Jamie Littlefield.