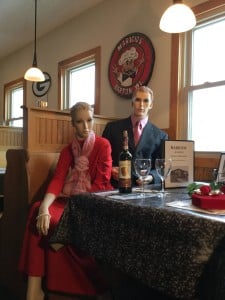 Hank waited at the door late Sunday afternoon as he called on Essie. Although the temps were freezing he wore a thin dark jacket because it was nicer than his wool coat. He stood at the bottom of the stairs, hat in hand and almost at attention.

Essie was right on time. She looked like a knockout in her long red dress. Her short hair, a hint of makeup, crystal blue eyes and that smile.  Hank grinned too.

“What are you smiling about,” she said with some sass.

Hank didn’t answer. He helped her on with her coat. They both took a quick breath as the cold slapped them in the face as they stepped off the porch and onto Monroe Street.

Heads down and collars high they walked quickly up the tree-lined streets; the hearty Oaks helped cut the wind, but not by much.  Hank walked on the street side and he took a couple steps ahead as they shuffled down River Drive then climbed the driveway up to Maricio’s. Hank held the door and Essie let out a big gasp as if she’d been holding her breath since they left the house.

Her eyes were watering from the cold.

“Grab a seat if you can find one,” said Mary Waters as she scooted round the back of the bar. “Herb Matenaer’s got a party goin’ on downstairs …. but you can crash it if you want.”

Mary was a spitfire and someone the ladies couldn’t figure out. She and her husband ran the corner pizza joint for nearly a dozen years; she was surrounded by carbs and never gained an ounce.

Hank and Essie slid into a booth. The couple took off their coats, settled in and eyed up the menu under the glow of the neon signs. The snow was falling a little heavier outside. Hank ordered a bottle of wine.

The conversation the rest of the evening was effortless. They had seen each other at Mass that morning but only managed a wave. Essie’s grandmother liked to sit up front at St. Mary’s.

Hank usually snuck in just as the second verse of the opening hymn was underway. It was Lent and he said he was making a strong effort to get there on time but already seemed to be failing.

Essie fiddled with a bandage on her finger. “I just did this, not more than 10 minutes before you rang the doorbell,” she said. “A button was loose on my coat and I tried to mend it quickly and I guess I mistakenly caught my finger on the needle.”

The deep-dish pizza arrived. It was huge. The cheese was stringy. Essie was delicate but could eat like a teenage boy. Hank was shocked but impressed.

The pair exchanged a few work stories but talked mostly about what their day consisted of when they got home. Essie usually peeled potatoes out back for supper, she had to practice piano for at least 20 minutes and she liked to roller skate with her sister.

Hank would pick up a quick coin or two by stopping in at Laddie Metters Meat Market on the way home. He took care of his chickens if a shipment came in. Essie squinched her nose and said she saw her daddy do that and she’d stick to potato peeling.

Hank said he liked to ice skate on the river above the dam. He also collected marbles and had to have at least one in his pocket each day when he left the house. “I’ll take it out during a break, hold it up to my eye and look thought it at the sun,” he said. “It’s like having a church window of my own; brilliant color makes me feel warm.”

Hank picked up the wine bottle and Essie waived him off. He poured more for himself. “What’s your middle name,” he said.

“Hank Coolidge,” he said with confidence. “My dad voted for Calvin Coolidge; said he was a man of strong character.”

Hank grabbed the lapels on his jacket and cocked his head up in a strong fashion. The show only lasted a moment and he laughed at himself. Essie liked how he clowned around.

Hank settled up the tab and the pair walked rigidly up the street into the wind and took shelter at Joker’s 5. There was the regular crowd at the bar. Hank plunked a couple nickels into the machine and played a mix of Glenn Miller, Sammy Kaye and the Andrews Sisters. 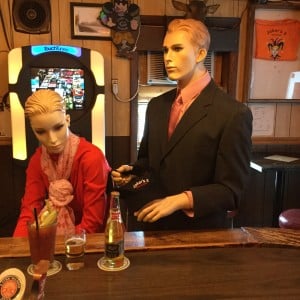 “We better get going soon,” said Essie. “I don’t want grandma to worry.”

Hank didn’t press her to stay. He had knew he’d have to get going early Monday as he and Jeff were going to be on the road installing cabinets for one of their customers.

Hank held the door for Essie. Both quickly stepped up Roosevelt Drive and took the corner onto Monroe Street. Their gloved hands held theirs collars high trying to keep the cold at bay. A porch light was left on for Essie.

Silence…. except for the distant rush of the Milwaukee River over the dam.

“Here,” said Hank. “Hold out your hand – now close it and don’t look until you get inside.”

He took her hands in his and slid a small object into the palm of her glove and then closed her hand tightly around it like a magician. “Find me tomorrow and tell me if you like it.” And with that Hank tipped his hat in gentlemanly fashion and watch Essie climb the porch steps and close the door.

Inside the heel of her shoe slipped on the cold tile floor. She caught herself on the door and stepped out of her shoes in disgust. She took off the scarf around her head, still clutching the object from Hank.

She slowly opened her fist and there in the middle of her white glove lay a shiny sapphire blue marble.

She put it between her forefinger and thumb and held it up to the light. Hank was right – it did bring a feeling of warmth.