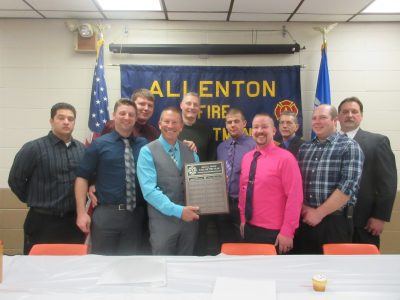 March 10, 2017 – Allenton, WI – Recently the Allenton Volunteer Fire Department took time to honor a number of individuals at its 2016 Annual Appreciation and Awards Banquet.  The occasion was introduced in 1972 as a way to show the department’s appreciation to those that volunteer their time to help others as well as their significant others. 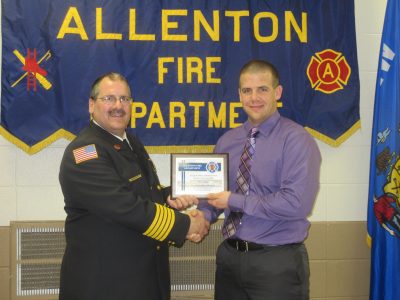 A new recognition was announced this was the Paul C. Wolf Call of the Year Award.  This award was made possible through a donation by the late Deputy Chief Paul Wolf Family in honor of Paul’s dedication to serve his community as an emergency medical technician and chief officer of the Allenton Fire Department.  A review committee looked at a number of calls the department responded to.

Part of the criteria was the affect the responders had on a positive outcome of those needing help.  Crews from the department ambulance and engine responded to a motor vehicle accident on the evening of Sept. 14.  The accident was a single car crash at the Canadian National railroad crossing on County Road D in Washington County.  Other responding agencies were Kohlsville Fire Department, Theresa Ambulance, West Bend Fire-Rescue Intercept, Flight for Life Helicopter Ambulance and the Washington County Sheriff Office.  There were two patients, one seriously injured.

The end result was the young lady is completing her high school career and has been accepted into a college, all despite missing two months of school due to her injuries. 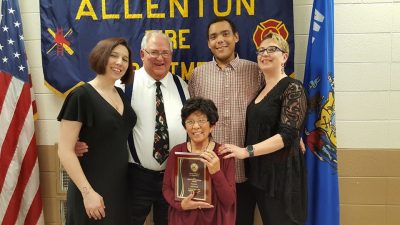 The 2016 Chief’s Recognition Award was presented to Ann Naab.  Ann has been a vital supporter of the Allenton Fire Department since 1971.  She started by supporting the department serving food and refreshments at the monthly auctions held in the station, working at the picnic, supporting firefighters with food and drinks during long-term incidents. She has assisted her husband, Ron, with organizing and announcing the Annual Allenton Picnic Parade and has been very supportive of the Wisconsin State Firefighters Memorial.

The department recognized a number of members for years of service.

Most notable of the honorees were: 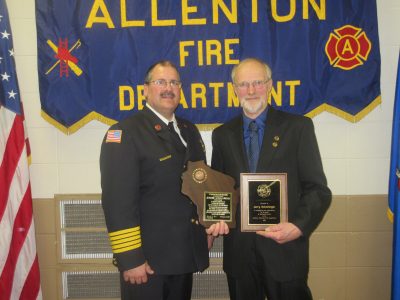 Steve Hart and Dan Wolf serving the department for 40 years.