Like Father, Like Sons. “I have to play to what gets them to be the best that they can be.” By Auburn Larson 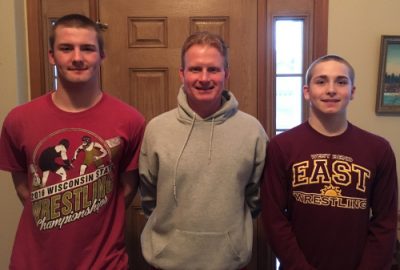 March 10, 2017 – West Bend, WI – There’s a good article on high school wrestling by reporter Auburn Larson in the latest edition of The Current. Larson writes about the Henschel family and how the East team features an interesting dynamic with Brent Henschel coaching his two sons.

A portion of Larson’s article is below.

Brothers Bryce and Cayden Henschel have been wrestling for eight years. Bryce is a junior and Cayden is a ninth grader. This year they wrestled together for the first time in three years on the varsity wrestling team. Their father, an East graduate, has been the head coach for two years and was also the 1993 state wrestling champion.

When asked about how they felt when their father became coach at East High, the brothers had mixed feelings.

“At first I was like, darn, now I can’t fool around, but then I started to think maybe I can,” Bryce said. “In every sport the coach’s kid always fools around the most, right?”

Being younger, Cayden’s transition into high school may have been made easier by having his dad as the coach.

“He’s coached me since I was really little so now we just get to keep that going,” Cayden said.

Register today for Not Just A Walk In The Park on August 5, 2021 at Riverside Park