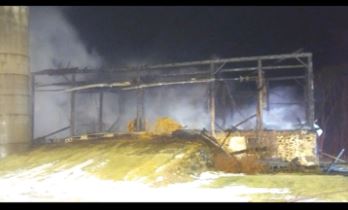 The 911 caller was a passerby who noticed smoke and flames coming from an old milk parlor which was located next to the main barn on the property. After calling 911, the caller stopped his car and woke up the property owner. The Allenton Fire Department was dispatched to the scene along with sheriff’s deputies.

Traffic on CTH W was shut down for 2 hours while firefighters battled the blaze. The cause of the fire is believed to be electrical in nature.  There was a heat lamp as well as heated water dish in the milking parlor for the homeowner’s cats in the area where the fire started.  There were no injuries as a result of the fire.