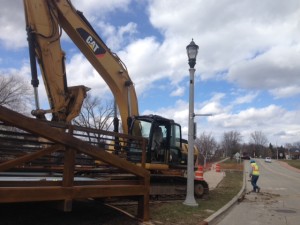 It’s a story we told you about first at http://www.washingtoncountyinsider.com as contractors worked today to move the new pedestrian bridge in place over the Milwaukee River.
It appeared the bridge delivered was not exactly what the common council had approved as they signed off on a white bridge.  Mayor Kraig Sadownikow said the contractor made a mistake, it will be white and the contractor has until the end of May to have it all done.

“No joy when someone makes a mistake but it will be corrected,” Sadownikow said.
On a side note: There were some usual suspects hanging out at the scene of bridge-gate on Service Drive – jawing with the contractors.
“I know where you can get some white paint – on sale,” said Terry Tennies with Tennies Ace Hardware. 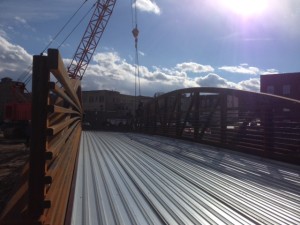