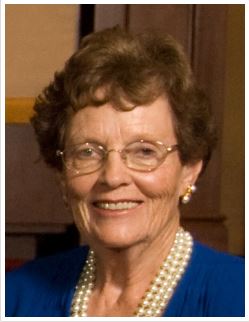 Marilou grew up in Lake Forest, Illinois, where her father was a professor of Philosophy and Psychology at Lake Forest College.  She graduated from Lake Forest High School in 1941 and the University of Wisconsin – Madison in 1945 with a bachelor’s degree in Business Administration.  While at Wisconsin, Marilou was an active member of Alpha Xi Delta sorority and served as president of Mortar Board and Phi Chi Theta.  Following graduation, she worked as an accountant for Ernst & Ernst in Chicago and McKinsey and Company in New York.

In addition to family, Marilou was passionate about her faith and music.  She and Chuck were active in the congregation of Fifth Avenue United Methodist Church for decades.  As a member, Marilou served as Church School Superintendent, junior choir director, organist and choir member.  Her love of music was cultivated as a child, with frequent trips to Orchestra Hall and Ravinia Festival in Chicago.  As a young adult, she took up the piano and trombone, and later in life learned to play the organ.

Marilou also valued education as evidenced by her involvement and leadership in the West Bend Community & Alumni Scholarship Foundation and the American Association of University Women, where she served as president from 1973 until 1975.  She attended ALL of her grandchildren’s high school graduations from Illinois to Ohio and New Jersey and most of their college graduations.

Marilou was an avid golfer winning 16 club championships at West Bend Country Club (WBCC) between 1958 and 1988.  She shared her passion for golf with youth by helping initiate the junior golf program at WBCC in the late 1950’s.

Marilou was also a member of the Women’s Northeastern Wisconsin Golf Association, the Washington County Campus Foundation and the American Lung Association of Wisconsin.  She volunteered with Meals on Wheels and at St. Joseph’s Hospital.  One of her favorite pastimes was playing Bridge, which she enjoyed until she was well into her 90’s.

For 25 years, Marilou and Chuck wintered in Bradenton, Florida and were members of Palma Sola Presbyterian Church where she also sang in the choir.  She volunteered at DeSoto National Memorial Park, Our Daily Bread and was very active in the Wisconsin Alumni Association- Sarasota/Manatee Chapter.

A Memorial service celebrating the life of Marilou Chapman will be held at 11:00 am on Saturday, May 19, 2018 at Fifth Avenue United Methodist Church in West Bend.

Friends are invited to visit with the family beginning at 9:00 am in the church lounge until the time of service. Following the service, a luncheon will be hosted by the church.

The family would like to thank the staff at Cedar Community for the loving care they provided.  In lieu of flowers, memorial gifts can be sent to: