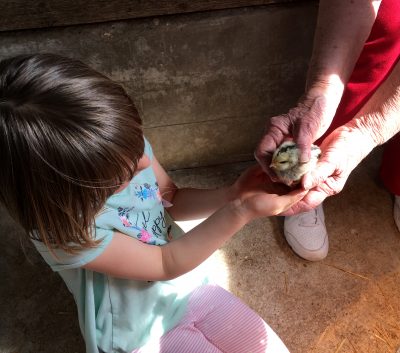 Flocks of chickens have been a mainstay at this Wisconsin Century Farm since it was established in the 1800s.

My great-grandmother raised chickens for meat and eggs*, as did my grandmother, and my mother after her.  Chickens of all kinds have entertained us and sustained us for generations – five generations to be exact.

Over the years the old coop across the driveway from us has housed Leghorns, Rhode Island Reds, Barred Rocks, Buff Orpingtons, Rock Cornish, Ameraucanas, Plymouth Rocks, and Anconas.

Then there were the cute Bantam hens who hid their clutches of eggs, finally parading their teeny tiny chicks around the farmyard and the Bantam roosters with the multicolored plumage who crowed from fence posts and rocks. Most of these birds had personalities that invited you to watch their antics as avidly as you might watch TV, but when I asked my mother to share funny chicken stories from when she grew up on the farm, she merely said, “We only raised Leghorns and they were just big and boring.”

After some thought, she continued. “When I was growing up, most farms had a straw stack in the barnyard, and the chickens loved it, especially when it was freshly made during the grain harvest. The hens would burrow into it, which meant that when I had to collect the eggs, I had to hunt through the stack, sometimes putting nearly my entire upper body into it to find the nests. I’d come out of the stack with a lot of straw in my hair, and sometimes with more than a dozen eggs from one nest.”

Territorial roosters have a way of herding small children into respectful behavior. Really!  Have you ever had to make a run for the door with an egg in each hand when you were in danger of getting a scolding peck on the leg? Never mind the scolding from Mom when you return with the egg she requested an hour after she expected you, or don’t return at all because a rooster kept you cooped. 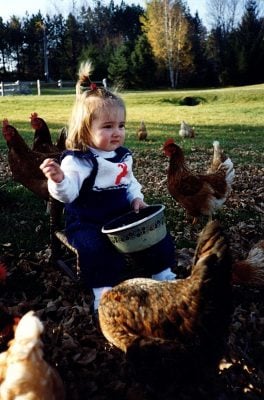 When our daughter Maddie was a little more than a year old, she would sit on a little wooden chair among the crackly fallen leaves outside the coop while the friendly Rhode Island Reds rooted for the oats she tossed at them from the bowl on her lap.

She talked to them and they cooed and clucked back at her while they ate.

The real show began however, when we found an unfortunate hen that needed burying in the back field. The poor, poor chicken lay on the shovel as her coopmates curiously paid their last respects.

What I didn’t expect was the long line of birds parading behind us to the field for a proper funeral service, and the experience was topped off when I heard Maddie babbling behind me as I dug the hole.

“Poor, poor chicken. Poor dead chicken…,” she said as she petted it and arranged its feathers, the other chickens milling around her and around the hole in the ground.

We fed baby chicks each spring and watched them sprout real feathers. We carefully clipped pictures of red tomatoes from seed catalogs to give the chicks something to peck at… do chickens see colors? My mother always said they loved red….

There have been others who have entertained us over the years: troops of ducks who marched around the barnyard and stood at attention as their “commander” duck quacked orders at them, watchdog geese who chased small children from the yard by nipping at the convenient height of their backsides, nervous pheasants who would do anything to steal away quickly into the wild, and the criminal guinea hens whose antics would lead their duck friends astray across Paradise Drive and into the neighbor’s woods.

But it is the chickens; always the chickens who have provided food and entertainment for us year after year, and we are looking forward to enjoying the new chickies as they grow up. 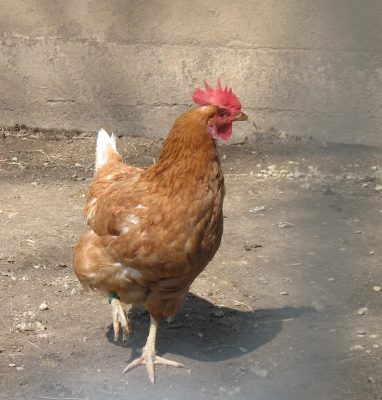 It is going to be a full summer, watching the chickens snoop around the farmyard and my yard searching for dandelion greens and bugs and worms for mid-day snacks.

I hope they find the bugs that want my garden veggies, but I hope they eat the bugs and not the veggies.

Hearing the roosters shout at the sun and at intruders and at each other is my favorite country pleasure, and the crowing alarm clock waking me at 4:30 a.m. to tell me the sun is rising soon is the best country pleasure of all.

* As well as meat and eggs, the chicken fat was rendered and used to make cookies and pie crusts and even soap! This was a working farm and nothing was wasted. Ever.