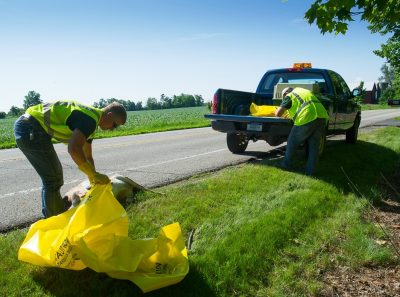 March 25, 2017 – Washington Co., WI – Neighbors in Washington County may have a problem on their hands in a few short days as Washington County Highway Commissioner Scott Schmidt sent a notice to the townships and villages that effective April 1 there is no contracted service to pick up deer carcasses from the county or town roads.

Assistant Highway Commissioner Ted Dumke stated there is no contract at this time for deer removal for Washington County.

“As of March 1, 2016, the new car-killed deer (CKD) removal and disposal process has changed.

Up until two years ago the Wisconsin Department of Natural Resources (DNR) covered the costs of large animal carcass removal from all roads in the state.  With budget cuts this service would only be done on federal and state owned roads and would be funded by the Department of Transportation.

In 2015, counties were told they could contract with the state’s contractor services as well.  The Transportation Committee in 2015 decided to spend $11,000 per year and the county would take care of deer carcass pick up on all county roads. Thus the county picked up the tab for town, village and city deer carcass removals.

In 2016 Washington County paid the contractor $7,884 for city, village and town road carcass removal.  The average was 700 deer carcasses per year which was about $11 per deer.

The state of Wisconsin recently advertised for bids from contractors on deer carcass pickup.

This year’s contract the state implemented only includes deer pick up from state and federal highways in Washington County.  The average pick up on these roads is approximately 1,000 deer per year according to Dumke.

This new contract calculates to roughly $8.30 per deer.  The contract the state has is a monthly fee for service.

The state did add on to its bid a request for cost-per-deer option for counties and locals.   This would allow the local units of government to contact the state contractor to see if they would assist the county and other local governments with pick up of deer as well.

However, when the county reviewed the proposal with the state contractor the local rate on the deer carcass rate came to $75 per deer!

As a result of this information the Public Works Committee instructed the Washington County Highway Department to seek a separate request for proposal.

If the county would go with statec, who would charge $75 per deer, the estimated cost to Washington County would be $33,975 for the year for county roads only.

Dumke said the average number of carcass pickups for 5 years on state and federal highways was 1,064 deer; on town/city/village roads the average was 252 deer and 453 deer on county roads.

Chairman of the Washington County Public Works Committee, John Bulawa said this is another unfunded state mandate that does not allow local governments to experience any cost savings.

“I would suggest that our constituents contact their local representative to ask to have this cost of deer carcass removal funded by the state of Wisconsin as it was 2 plus years ago,” said Bulawa.

It appears this move by the state may save the “state taxpayers” money.  Now we have 72 counties that have to write up requests for proposal, evaluate the proposals, invoicing the contractor and many more expenses.  It is apparent to some that state contractor has determined to charge more per deer pick up because of the “economy of scale.”  Economy of scale translates into, higher volume of deer, the less expensive.  Thus the state is charged $8/deer and the locals get charged $75/deer due to fewer numbers.

At this time the Highway Commissioner was instructed to send out a bid request to a number of contractors to evaluate their cost and if this will be a savings that could be passed on to the local governments or could the county absorb into their budget as they did before 2015-2017 budget.