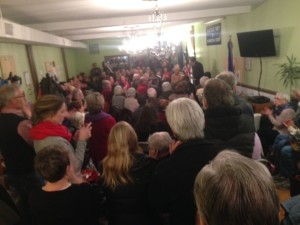 About 120 people turned out on a chilly Tuesday night to welcome U.S. Senate candidate Russ Feingold to West Bend.

Feingold packed them in at the Washington County Democratic Party office on S. Main Street.

Dressed in a relaxed plaid shirt and dark sport coat, the 62-year-old politician from Janesville ramped up supporters with bullet-point topics like the minimum wage, the VA, social security and student loans.

“It’s terrible what’s happening with young people with $28,000 in student loans,” said Feingold. “This isn’t just about the student its about the family and you realize what terrible affect is has across the generation.”

Feingold shouted brief statements like “I believe we should have $15 an hour” and “I want to enhance social security and make sure seniors have what they deserve.”  There was rousing applause, but no details given on how he would craft those plans. 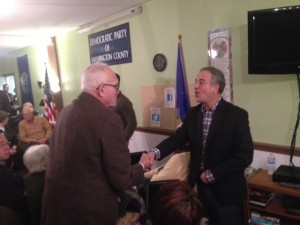 Paul and Hope Nelson had front-row seats for the speech. “We’ve supported him before he was elected in his first term,” Paul Nelson said referencing the Feingold campaign of 1982. “I’ve never seen him make a mistake. He’s probably the most prepared candidate I’ve ever seen.”

After a 20-minute speech Feingold worked the crowd, shaking hands and posing for pictures.

Former West Bend alderwoman and newly retired executive director of the Washington County Senior Center, Deb Anderson said she was impressed. “In a time when everything is so polarized, he is a voice of reason and looking out for regular people.”

Feingold is a candidate for the U.S. Senate in 2016; he’s challenging Republican incumbent Ron Johnson.