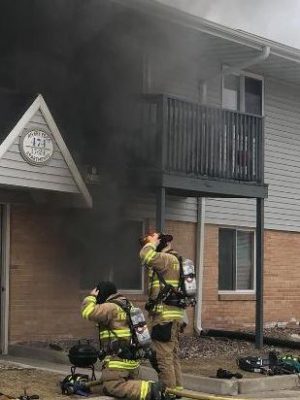 March 29, 2018 – Fond du Lac, WI- A Fond du Lac family is dealing with the worst life can throw at them on several different fronts. Shannon Roemer is a single mother raising two young boys. Monday night they and seven other families were displaced by a fire at the River’s Edge Apartments.

They are currently staying in motel room looking for a new place to live. They were able to get back into their old apartment to grab a few essentials, but the fire damaged nearly everything.

She said, “So the heat into my apartment was so intense that it melted my television. There is just broken items all over. There is soot over all of our belongings,” said Roemer.

Meanwhile Roemer and her 13-year-old son have been dealing with a bullying issue. He goes to Bessie Allen Middle School in North Fond du Lac where kids have been physically and verbally assaulting him. The pressure is kept up on him on social media and through phone messaging.

“There were death threats on his phone, you’re going to die when you come to school. I told him I’m not taking this lightly in this day and age all those bad things that happen in school,” Roemer said.

There have been numerous meetings with the school principal, according to Roemer as well as the school resource officer, kids and their parents and the bullying will lull for a while then start up again. He got another threat on his phone the night of the fire that when he returns to school after Easter break he’s going to get “slapped up.”