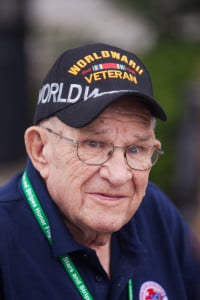 He served in the U.S. Army during WWII from 1945 to 1946.  He owned and operated Gillfoy Printing in Milwaukee for many years until his retirement in 2002.  He enjoyed spending time at Rollingstone Lake, relaxing and trying to catch the “Big One”.

In addition to his parents and wife, he was preceded in death by a grandson, David Wilde, and a great-granddaughter, Lauren Wilde.

A memorial service in remembrance of William will be held on Saturday, January 16 at 2:00 p.m. at the Myrhum Patten Miller & Kietzer Funeral Home, 1315 W. Washington St., West Bend.  The family will greet relatives and friends at the funeral home from 12:00 Noon until the time of service.

In lieu of flowers, memorials to Stars and Stripes Honor Flight would be appreciated.

The family expresses their gratitude to the staff of the Samaritan Health Center and Allay Home and Hospice for the care given to William.

The Myrhum Patten Miller & Kietzer Funeral Homes have been entrusted with William’s arrangements.  Additional information and online guest book may be found at www.myrhum-patten.com