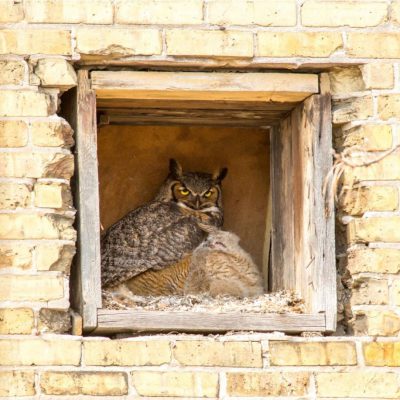 Greg Lofy from ASP Images  captured a couple of white tufts of feathery balls in the nest with mama on Friday afternoon.

Passersby have said there are two, possibly three owlets in the nest.

Last year the nest was spotted with the owlets in the month of May.

The Cornell Lab of Ornithology provided a lot of great facts on owls and their nesting habits and the owlets.

Great Horned Owls are monogamous and members of a pair often remain on the same territory year round. Pairs may stay together for at least five years, perhaps for life. If something happens to one of the pair, the survivor will usually find another mate.

How many eggs do Great Horned Owls lay?

It ranges from one to four eggs, very rarely five, with two being the most common.

When were the eggs laid?

The eggs were laid during the first week of January 2015. Great Horned Owls generally only have one brood per season. Replacement clutches are possible if the eggs are taken or destroyed during incubation. The timing of laying varies with latitude. In lower latitude states, such as Florida, incubation can begin in late November. In the Carolinas, eggs are laid from late December to early January. One egg is usually laid every two days, but there can be an interval of up to one week between laying.

How long does it take for the eggs to hatch?

Incubation begins after the first egg is laid, so young hatch over a period of several days. According to the scientific literature, Great Horned Owls usually incubate their eggs for about 30—37 days.

No one is sitting on the eggs or young. Won’t they get cold?

It is normal for parents to leave the eggs and nestlings exposed now and then. In most cases, they don’t stay away long enough for the eggs or young to suffer harm. Great Horned Owls have evolved over millions of years to cope with variable conditions, including harsh weather. The owls are able to incubate eggs successfully when outside temperatures are below -27.4 degrees Fahrenheit (-33 degrees Centigrade). Eggs have been recorded to withstand female absence of 20 minutes at -13 degrees Fahrenheit (-25 degrees Centigrade) when the female joined her mate in hooting at a neighboring male.

Which parent sits on the nest?

Only the female incubates the eggs. She has a featherless area on her abdomen called a “brood patch” which is designed to keep the eggs warm. This patch has lots of blood vessels just beneath the skin that transfer heat to the eggs. The male does not have a brood patch.

What happens to the bird droppings and leftovers from the prey?

Nestlings usually defecate over the side of the nest after four weeks, leaving a pungent spray of “whitewash” on shrubs and saplings in the understory. Prey is swallowed whole and can be used as nest material.

How can you tell the male and the female adults apart?

As in most other raptors, females are heavier than males; sexes are otherwise similar in appearance. Only the female incubates the eggs and broods the young; the male delivers the prey. Even though the female Great Horned Owl is larger than her mate, the male has a larger voice box and a deeper voice. Pairs often call together, with audible differences in pitch.

Click HERE to read more from The Cornell Lab of Ornithology.