Home  »  Uncategorized   »   Happy 106th birthday to Clara Moll of Barton. “When I was a little girl I’d wear out roller skates” 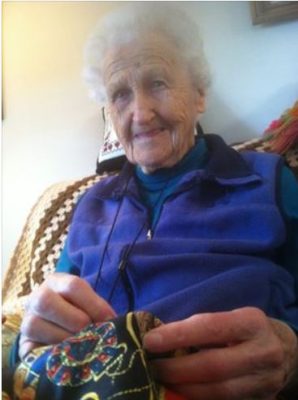 I tried to explain to a friend about Clara and her history in the community.

I find it’s easier to post the story I wrote about her when she was about to celebrate her 104th birthday. This story is in the archives in the Research Center at the Washington County Historical Society. 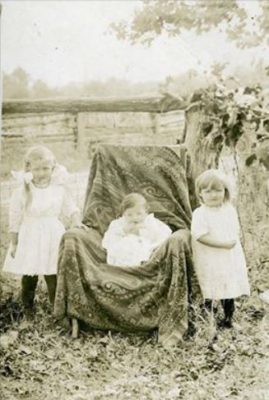 Thousands of birthdays were celebrated in the area this year but only one for someone who could place 104 candles on a cake and have a fire extinguisher on standby.

“I’m one in a million,” said Clara Moll as she received well wishes, cards and gifts during her 104th birthday celebration Friday at her home on Salisbury Road. “We had pizza and welcomed anyone who happened to stop,” daughter Mary Moll said.

Born in Missouri on Dec. 19, 1910, when William H. Taft was President of the United States, Clara Moll came to Barton after her mother died when she was 46. “My dad was a cowboy out of South Dakota. What was he going to do with five kids? So I came to live with my godmother in this house when I was about five years old,” she said.

Dressed simply in dark blue sweatpants, a long-sleeve collared shirt and white sweater vest Moll spoke with confidence about her life and happenings over the last 100 years.

“The biggest thing that’s changed on this block is the makeup of the family,” Moll said. “My husband died when he was 74 and he said, ‘Clara you watch, when women all go to work there will be nobody home to cook and there will be nobody home for the kids; you’re going to have hard times.’” Animated, Moll points out the window from house to house to house announcing she has dubbed the block “Divorce Street.”

A strong Catholic, Moll attended St. Mary’s School and then Badger High School. When she was in her teens she worked at Enger-Kress and later Amity Leather.

She recalled the day when she sat in a plush chair in front of Mr. Rolf’s at Amity. “I’m deserving of a raise I said and he said, what about the others and I said, well sure but I deserve a raise. Do you know I got a $10 raise and they all got $5,” said Moll about the monthly increase.

Vibrant, spry and sharp Moll credits her good health to exercise. “When I was a little girl I’d wear out roller skates,” she said. Skipping rope was another popular past time along with what she called “tomboy activities.” “I could climb trees that nobody could climb,” said Moll proudly. “I could swim across Wallace Lake like it was nothing. I never played with dolls, never,” she said, biting off the last word like a drill sergeant.

Dancing was another passion. “I’d rather dance than eat,” said Moll, getting up from the table and bending over at the waist, resting her palms on the floor displaying her flexibility. In a blink Moll was standing in the doorway, her hands on the frame for balance as she swung her leg back and forth with ease of a gymnast. “We’d all danced and Lefty Ustruck who lived down the street, we could both kick our legs back and hit ourselves in the head.”

Moll has lived through history-making events, remembering local happenings better than national events. When the tornado came through West Bend in 1981, Moll was safe at the hospital on the hill, recovering from a hysterectomy at St. Joseph’s.

There were recollections about taking milk in a pail to Young America where they made cheese, baking stollen and angel food cakes, and “if you would have ever told me there would be people living in the West Bend Company building, I’d have said you were crazy.”

Moll said her godmother Sophie was a woman of faith and she was strict. “She’d send the boys home,” piped Moll recalling she was first allowed to date at 18. “When I went to school I knew the Apostle Creed, the Our Father and the Hail Mary and in this house the Rosary was said every day of the year, even when we had company.”

Discussing life in general, Moll said she is “the last one left” and is looking forward to being reunited with her friends. “I’m going to have the smallest funeral, a Mass and that’s it, then everybody goes home,” she said. “I’m going to be cremated. Do you think I’m going spend $8,000 on a funeral and then go in the ground; no way! We’ll give the money to the school or where ever it’s needed.”