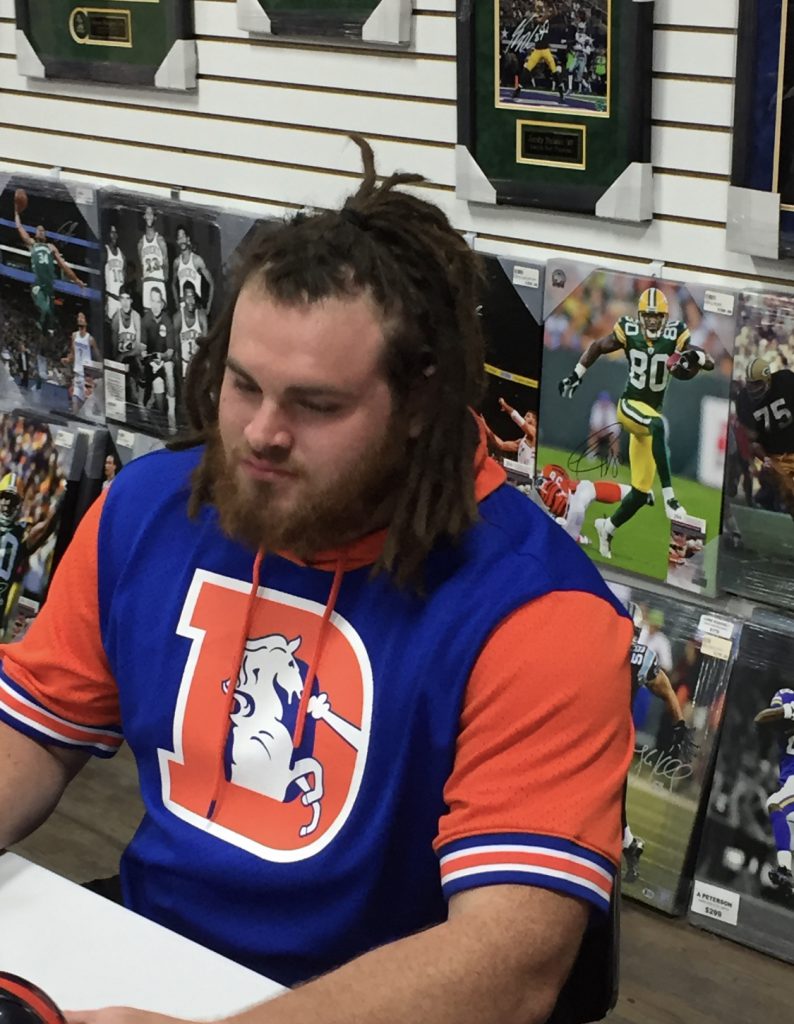 About 30 people gathered for the brief, but spirited meet and greet. The items Meinerz signed included UW-Whitewater and Broncos jerseys, mini-helmets, and pictures. 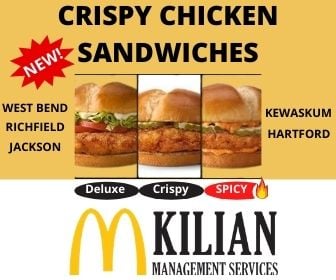 A sizable figure, Meinerz stands 6-foot-3 and tips the scale at 320 pounds… and counting.

Now a mountain of a man, Meinerz said his interest in football started when he was little. 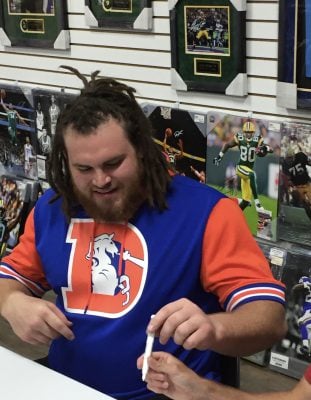 “As far I back as I can remember, I played catch with my dad,” he said. “When I was growing up in Muskego, I played football with one of my neighbors who I looked at as almost an older brother, plus I loved watching Brett Favre play.”

A 2016 graduate of Hartford Union High School, Meinerz said he definitely misses his high school offensive line coach. “My senior year he had a package for me in the backfield that he called ‘jumbo,’ which I definitely miss, being able to get a five-yard head start before going to block.”

While at UW-Whitewater, Meinerz said his favorite moment was “beating St. John’s at home to go to the national championship game (2019).”

Meinerz also spoke fondly of his Senior Bowl experience earlier this year. “I had hopes and dreams to get to that game, to go down there and be able to hold my own,” he said. “I wanted to crush the question of ‘level of competition’ for Quinn Meinerz.  I was able to go down there and take on SEC, Big 10, Pac 12 or whatever competition.”

In April 2021, Meinerz was drafted by the Denver Broncos in the third-round. “It was such a crazy moment I don’t really remember much, but it was awesome to be with friends and family because it was a surreal moment,” he said.

After spending much of his career as left guard at UW-Whitewater, Meinerz has slowly taken to playing center, even in the opening minicamps prior to the main team training camps which start later this week.

The challenges to playing center have been different for Meinerz, especially the mental aspect of the position.  “You have to be more in-tune with the game,” he said. “It’s more than having good footwork, you have to snap the ball to the quarterback accurately every single time.”

Having his senior season at UW-Whitewater cancelled, has made the adjustment tough but Meinerz said some mentors on his new team are helping adjust.

“Our (Denver’s) left guard Dalton Risner has been a huge help to me and all the other rookies and even the other center, Lloyd Cushenberry, has been a great help,” said Meinerz. “Especially since he’s going into year two, he can answer my questions about what it’ll be like as a rookie in the NFL.” 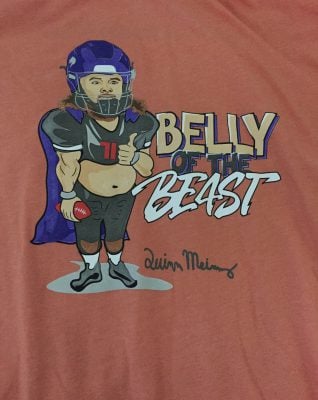 Not all the action for Meinerz as a NFL pro has been on the field. In an effort to pay it forward, Meinerz has started marketing custom “Belly of the Beast” t-shirts.

“These were inspired by my nickname ‘The Gut.’  Friends called me that in high school.

“While at UW-Whitewater I wanted to do something positive with the fame I got from ‘the gut’ and the belly hanging out, so I reached out to one of my cousin’s and asked if they could help create a shirt and he came up with slogan ‘Belly of the Beast.’”

Due to his fame on the gridiron and his distinct look, it can be hard for the ‘Belly of the Beast’ to go unrecognized in public. “When I am in Hartford, I try to let my parents go to store and stuff. In Waukesha I’ve been recognized a couple times and in Denver it happened a couple times so I might have to make my girlfriend do the shopping.”

Meinerz said he loves meeting people and fans; it’s just nowadays he can be in a rush to be somewhere or get something done.

With his newfound fame, Meinerz said he still tries to keep things simple. “I am someone who wakes every day and tries to have a positive attitude and just treat everyone the way I want to be treated,” he said.