May 11, 2018 – Hartford, WI – Mother Nature is not making it easy on the Park and Rec crew in Hartford as it works to prep Veterans Memorial Aquatic Center for opening day.
“The late snowstorms have pushed off our crews from getting into the facility this year which is giving them less time to prep the pool for its second full year of service,” said City Administrator Steve Volkert. “As of April 19, snow was still surround the facility. With the warmer temps in late April, all the snow has now melted and work on the pool surface is now in full swing.”
As pool maintenance and cleaning continues, the staff hope to fill the pool next week, getting ready for the scheduled May 26 opening. Last year, the pool opened May 28. 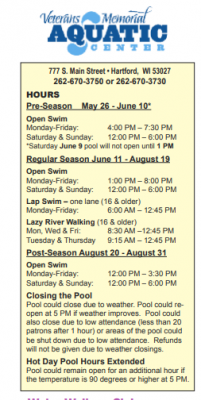 For the most part, the hours are the same as last year, though they shortened weekend hours. Last year, open swim was from 11 a.m.- 6 p.m. and this season it’s 12 p.m. – 6 p.m.
Those interested in lap swim can rejoice in better hours, as last year you could only squeeze in laps from 6 a.m. – 9 a.m. and this year the hours have been extended to, 6 a.m. – 12:45 p.m.
As the swim season starts, don’t forget to bring your season passes or cash (they don’t take credit cards, but there is an ATM onsite), your own towels, coast guard approved life jackets, water bottles, extra cash for snacks (you cannot bring in food), and 50 cents if you want a locker to keep your valuables safe.
Season passes are already available for purchase, which you can pick up at the Recreation Center during office hours (Monday-Thursday, 7 a.m. – 5:45 p.m. and Fridays, 7 a.m. – 4:45 p.m.)
Photo courtesy City of Hartford 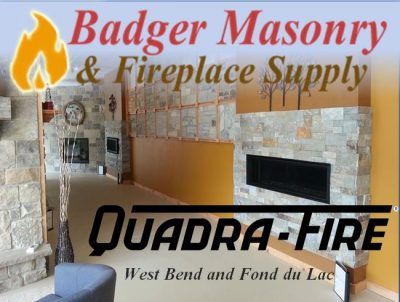 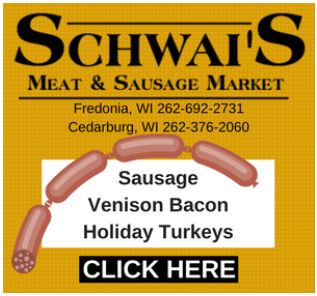 Previous articleSurvivor Celebration Lunch is Saturday, May 19 at Holy Angels School in West Bend
Next articleVIDEO | Mark your calendar for Mai Fest in Germantown

Pumpkin Pie is Dairy Queen’s Blizzard® of the Month