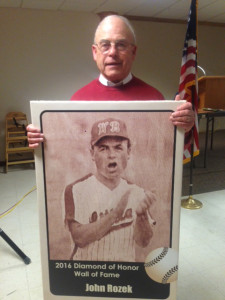 He’s described as “one of the most humble guys in baseball” and on Saturday night John Rozek was inducted into the West Bend Baseball Association Diamond of Honor Wall of Fame.

Rozek, originally from Oshkosh, moved to West Bend in 1968  and started to grow youth baseball. Over the years he coached little league teams, the Amity Dodgers and the Dairy Queen team. He played for the West Bend Lithias in the Land O’Lakes league and later served as player / manager.

There was a bit of roasting during Rozek’s introduction by Doug Gonring. “I judged John by his size when I first saw him,” said Gonring. “I thought he was the bat boy but it’s the size of the heart that makes all of us better.” 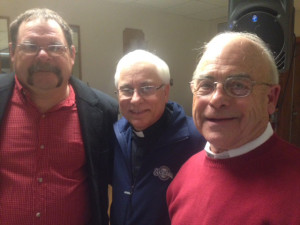 And with that, Gonring pulled a Yellow Pages phone book from a brown paper bag, so Rozek could stand on a bit of a pedestal as he accepted the WBBA award.

Rozek praised the game of baseball. He talked about his passion and commitment. “The kids fund raised by selling candy bars,” he said. “I bought them all.

“They also sold shampoo one year and I bought that too.”

Rozek also talked about the challenges of growing old with the game. “I watch my grandkids play … and it’s very difficult not to coach,” he said.

Rozek praised his family for allowing him to live his dream of baseball. “When you volunteer, your family needs to be supportive,” Rozek said. “I just want to thank my wife and children.”

Rozek was inducted along side the Liebetrau family and Marv Zarling.

Find more local stories from West Bend and the surrounding communities by logging onto http://www.washingtoncountyinsider.com