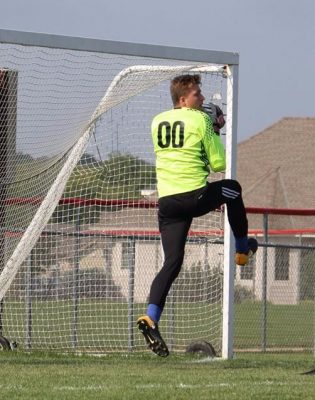 It was the visitors who scored the first goal, when Max Stilb fired in a close-range shot off a throw in.

The Chargers responded just two minute after, courtesy a Jake Semenske free kick. Semenske’s shot caromed off the wall, then floated just past Black Hawk keeper Isaiah Voiland and into the net.

KML took the lead in the 31st minute off Luke Willis’s penalty kick, but Grafton had a spot kick of its own just moments later.

Brian Holdmann stepped up to take the shot, but KML keeper Zachary Zuleger was up for the challenge, keeping the ball out and preserving the lead.

The Chargers then doubled the advantage 25 seconds before halftime, when Ethan Duba’s long through ball found Joseph Raasch, who raced through on goal and slotted the ball home.

The Chargers maintained pressure in the second half, and almost grabbed another goal when Ethan Duba’s long-range effort hit the crossbar.

But it was Grafton who bagged the first goal of the second frame, as Evan Jobe slipped a shot past the keeper and into the net in the 69th minute.

A flurry of goals ensued, as Joshua Pahmeier restored the two goal lead with a finish off a pass from Jacob Niemann in the 73rd minute, but the Black Hawks answered through Brian Holdmann just 54 seconds later to pull back within one.

A frantic final minutes saw several chances for Grafton to equalize, but KML held firm for the win.

Next on the schedule for the Chargers is the KML Quad on Saturday morning, featuring Wisconsin Lutheran, Lakeside Lutheran, Winnebago Lutheran.

Photo is of Zachary Zuleger, courtesy of Paula Asen