March 6, 2019 – Washington Co., WI – On March 15 the Kettle Moraine YMCA will hold its annual Party with a Purpose at Terrace 167.  The Annual Campaign is designed to make sure everyone has affordable access to the YMCA.  This year the Y celebrates its 50th year, honoring one of the original founders, Vic Albiero.

In 1969 Bernie Ziegler had a vision to create a YMCA in West Bend.  His first stop in order to share this vision was at the home of Vic Albiero.

He was in full support and honored to be asked to be a part of the process.   As quoted per Vic, “the three horsemen were Bernie Zeigler, Cliff Nelson and Norman Schowalter.  They made certain the plan was on sound footing.”

Shortly after the conversation at his home, West Bend was declared a branch of the Milwaukee YMCA.

Vic was elected the first Board President of the YMCA, and still holds the record for most years as Chairman at five. 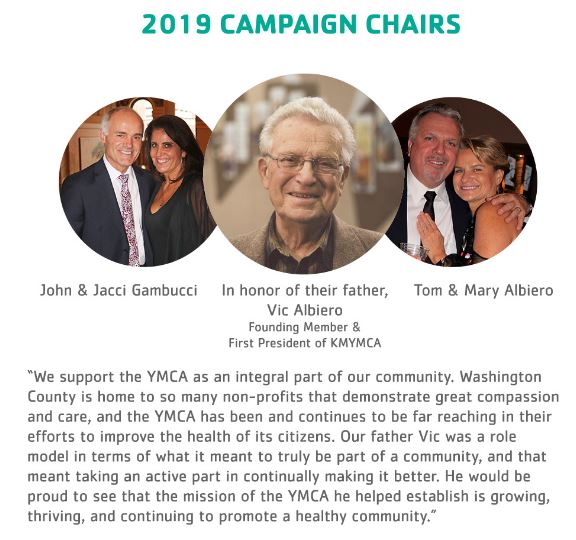 At that time services were held throughout the community, including swim lessons in the backyard of people’s homes.  Vic’s daughter Jacci Gambucci taught for this program with cousin Pat from 1973 until leaving for college in 1978.  In 1973 the KMYMCA separated from Milwaukee and became an independent association.

A capital campaign raised $2 million in 1977, and in 1978 the original building opened.  Since then there have been numerous expansions.

“My family is very proud of our father’s part in shaping the YMCA,” said Gambucci. “He was involved in numerous community projects, but was most gratified with his work developing the Y.  He would be so pleased with where it is today, serving so many by helping them lead healthy lives through programming for chronic illnesses and giving the disadvantaged a place to belong through member scholarships.”

Gambucci and brother Tom Albiero are excited to host this years Party with a Purpose in honor of their father, and will be joined by 3 out of 4 of their siblings who reside out of state.

Jacci and Tom would like to encourage the community to come celebrate their father’s legacy and the 50th anniversary of the Kettle Moraine YMCA.

Party with a Purpose is designed to bring the community together to create an awareness, while building momentum to support our friends and neighbors in need.

“Most importantly this happens over friendships, new and old, food, cocktails, auction, and live entertainment.  A true sense of community is when you can’t get your guests off the dance floor as good times were had by all,” said JennyZaskowksi, YMCA Director of Donor Development.

“As we celebrate our 50th Anniversary, this year’s 2019 Annual Campaign goal is $300,000.  This goal is achieved with the help of the Albiero family, our 18th annual golf outing in May, board, staff and community donations.  Today our West Washington and River Shores Branch serves more than 13,000 members.  With our campaign initiatives, approximately one-in-six receive some form of assistance to make certain they can continue to participate in our services.”

Click HERE to get tickets. Please order before March 8.

Join the Gambucci/Albiero family and let The Love Monkeys help kick off your St. Patrick’s Day weekend ~  a good time will be had by all!