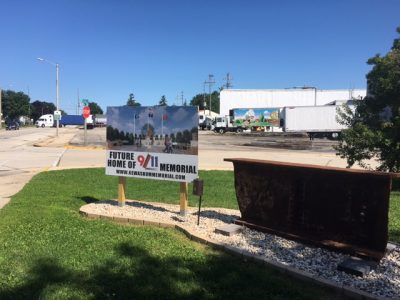 August 12, 2017 – Kewaskum, WI – During a Kewaskum Village Board meeting  there were some concerns brought up during an informal non-agenda discussion, about the proposed location for the 9/11 Memorial.

Initial plans for the Memorial were for the location to be in front of the Kewaskum Fire Station on the east side of USH 45.  These plans were presented to the Village in September of 2016, and were subject to the approval by the Village Board, which included a Memorandum of Understanding with the Village concerning future maintenance of the structure.

During the meeting with Mr. Heiser (who is also a Board member of the Kewaskum Remembers 9/11 Memorial Inc.), and the Chief, valid issues of concern over this location were expressed including the proposed Fire Department location offered only limited parking availability for the memorial; and if there would be an expansion of the Fire Department, it could be in conflict with the constructed memorial.

Of prime concern was the location of the memorial at the fire station could hinder access of FD personnel responding to calls and perhaps create safety issues both for the public and to EMT’s and firefighters when FD vehicles leave the station for emergency calls.

As a result of this meeting, it was agreed by all the parties that the lawn area in front of the Kewaskum Village Annex fronting 45 was a more viable site for the memorial.

There is a tremendous amount of parking available at this site as well as the availability of the Annex building for special events. A subsequent meeting with the architect and designer of the memorial indicated the design will be adaptable to this location and indeed may be easier for construction.

At the July meeting with the Village Board, the Annex site was discussed as a viable location and again subject to the Memorandum Of Understanding and public hearings on the Annex location, a new survey will be completed and moderate design modifications to the Kewaskum Remembers Memorial will be developed.

During the August 7, 2017 Village meeting discussion of the Annex site as well as presentation of a draft Memorandum of Understanding between the memorial corporation and the Village were agenda items.

On August 28 the Village Board will meet again to vote on the Memorandum of Understanding.

Haberman is hopefully their 501 C status will be official shortly and the project can comfortably proceed with the new survey of the site and moderate design changes to the memorial for presentation to the Village Board and the community. The steel from the WTC and the new sign depicting the memorial are now at the Annex site.

Haberman said the concerns about the Fire Department site would have had to been addressed prior to any construction being begun and that the Kewaskum Remembers 9/11 Board is greatly appreciative of the support by the Village in seeing this important memorial become a reality.