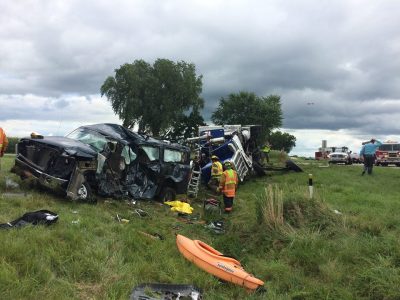 August 11, 2017 – On August 11, 2017 at 2:11 p.m. The Columbia County Sheriff’s Office received a report of a semi vs. passenger van crash on STH 73 at CTH E in the Town of Randolph. The village of Randolph is located approximately 43 miles north east of the City of Madison.

Preliminary investigation shows the semi-tractor trailer was traveling east on CTH E and failed to stop at a stop sign and struck the 2013 NV3500 Nissan Van, which was pulling a camper northbound on STH 73. 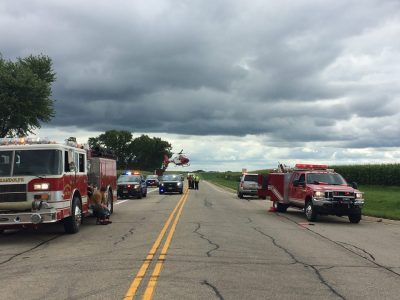 The driver of the semi is a male, 39, from Collins, MS and was the sole occupant. The semi driver was trapped in the vehicle and extraction was required.

The driver of the minivan is a female, 40,of Lake Geneva, WI. The female driver was also trapped and extraction was required and seven juvenile family members were in the van as well.

The driver of the minivan and a juvenile are in serious condition. Three of the other juveniles in the van also had minor injuries. The semi driver was injured as well.

The two individuals from the van, who were in serious condition were each sent by medical helicopter from the scene. The remaining injured subjects were transported via ambulance to a local hospital.

STH 73 and CTH E were closed due to the crash. The crash remains under investigation.