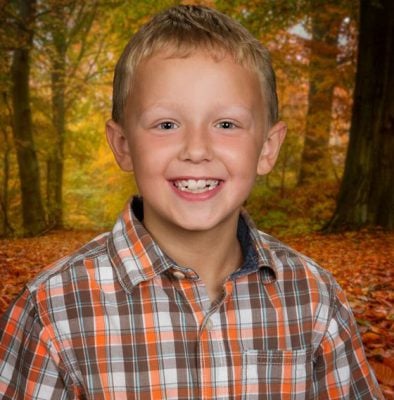 April 17, 2018 – Hartford, WI – Logan Johnson was a healthy 8-year-old boy when he was diagnosed with an illness called Myocarditis (Inflammation of the heart) which doctors believe was caused by Parvovirus B-19 (known as 5th disease).

The nightmare began on May 6, 2017. Logan played a soccer game that morning. He had been sick with a low-grade fever the day before and seemed to be feeling better, but the game wore him out and the fever returned.

Later that day, he complained of pain in his chest and abdomen. He collapsed at home and was taken by ambulance to Children’s Hospital. After many hours and extensive tests, ultrasounds, and lab work – he was diagnosed with Myocarditis. He was placed on life support to try to save him.

After three excruciating weeks in the hospital, Logan went to heaven and is now safe in the arms of Jesus.

2 days prior to becoming ill Logan asked his mom what his purpose was and why God made him. Little did this 8 year old know that his story and journey would touch so many lives and bring people closer to their faith in God.

Logan’s family is hoping that through “Logan’s Laps for Love” event money raised will help Children’s Hospital to find out more about Myocarditis, ways to prevent and treat the illness, and maybe someday soon no other family will have to endure the loss of loved one from this disease.

Click HERE to participate in Logan’s Laps for Love on May 26 at Hartford High School track.