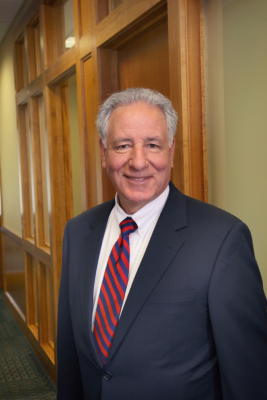 May 8, 2017 – West Bend, WI – Community-minded attorney James Spella is being named the Greater Milwaukee Foundation’s 2017 Professional Adviser of the Year for his decades of thoughtful service to clients in West Bend and beyond.

Spella is a partner at Schloemer Law Firm in downtown West Bend, concentrating on estate and succession planning, real estate, and business matters. Through his practice, he has helped introduce many generous people to resources for exploring their philanthropic needs and interests, including the expertise offered by community foundations.

One of his signature roles in the community was serving as an attorney for the founders of the West Bend Community Foundation in the late 1990s.

It is now the largest of three partner foundations affiliated with the Greater Milwaukee Foundation. In addition to serving as past president of its board, Spella has guided many clients who’ve chosen to establish charitable funds there.

“This community has always had a big heart,” Spella said. “When you are surrounded by people who are so committed and so self-giving and have that value system, it kind of rubs off on you.”

“Jim has played an instrumental role in extending the reach of philanthropy within the region,” said Tim Larson, vice president of philanthropic services at the Foundation. “With the relationships he has built and his focus on strengthening the community, he is a very deserving Professional Adviser of the Year.”

Spella will be honored May 18 at the Foundation’s annual Herbert J. Mueller Society luncheon. The recognition society acknowledges the efforts of professional advisers who are committed to their clients, philanthropy and the community. The society is named in memory of Herbert Mueller, a local estate planning attorney who, through his quiet efforts, helped shape the Foundation into the strong, stable and successful organization it is today.

By the time of his death in 2001 at age 91, Mueller had worked with his clients to start more than a dozen Foundation funds with gifts totaling nearly $50 million.

About the Greater Milwaukee Foundation
For more than a century, the Greater Milwaukee Foundation has helped individuals, families and organizations realize their philanthropic goals and make a difference in the community, during their lifetimes and for future generations. The Foundation consists of more than 1,200 individual charitable funds, each created by donors to serve the charitable causes of their choice. The Foundation deploys both human and financial resources to address the most critical needs of the community and ensure the vitality of the region. Established in 1915, the Foundation was one of the first community foundations in the world and is now among the largest.