Home  »  Uncategorized   »   Memories of shopping for Christmas in West Bend 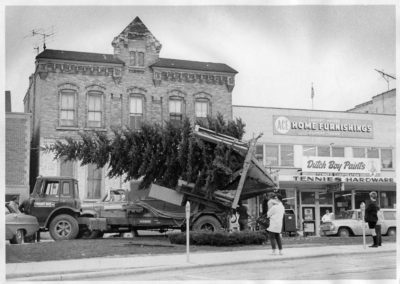 Dec. 4, 2016 – West Bend, WI -We’re right in the midst of the Christmas shopping season and I found an article I published in 2010 in Around the Bend. It’s an oldie but a goodie. Enjoy!

It was an era before Mayfair Mall and the Bay Shore Town Center. It was even before the Westfair Mall and the West Bend Outlet Mall which included stores like The Cookie Jar, Knit Pikker Factory Outlet, Uncle Wonderful’s Ice Cream Parlor, and Rainbow Fashions.

“We shopped downtown because there wasn’t anything on Paradise,” said Jerry Wolf. “The city ended by Badger, which was the high school at the time.”

Wolf was about 10 years old in 1945; he recalled there were three grocery stores downtown including a Red Owl at 138 N. Main St., currently home to Ooh La La.

“Jeklin’s Shoes was on the corner of Main and Cedar Streets and just south of that was a hardware store called Gambles and I bought my first bicycle there, I think it was a Hiawatha,” said Wolf.

Cherrie Ziegler Catlin remembered the F.W. Woolworths downtown. “It was a haven for all sorts of trinkets that kept kids busy spending their allowance each week,” she said.

Bonnie Brown Rock remembered Carbon’s IGA grocery on Main Street as well as Naab’s Food & Locker Service. “My parents bought sides of beef which were kept in a freezer at Naab’s store,” said Brown. The business was at 432 S. Main St.

“Dad also went there to get ice cream cake roll on Sundays as our refrigerator didn’t have a freezer,” she said.

“That was in the late 1930s and early 1940s,” said Miller. “J.C. Penny’s was one of the stops for dry goods and the unique thing about the early Penny’s was the cashier was upstairs in a loft. The clerk would put money in a kind of cup, attach it to a ‘trolley’ affair and pull the handle sending the trolley, cup and money to the cashier who in turn would put the change in the apparatus and send it back.”

Parking, recalled Miller, was a problem. Main Street was originally Highway 45 and shoppers parked parallel to the curb, not at an angle as it is today.

“Tight quarters meant shoppers would double park, that meant side by side,” said Miller. “This caused some problems but was later accepted. I believe there was a time limit as to how long one could double park.”

Other unique downtown shopping standards, according to Miller, were grocery stores did not have aisles and display racks, because the grocer got the items from behind the counter. Almost all transactions were in cash as credit cards were none existent and checks were few.

“On rare occasions after shopping we would pick up my grandpa and go to Sam Moser’s tavern (currently Muggles) for chili, maybe a hamburger and a small glass of beer,” said Miller. “Yes, beer was OK for kids as soda was not good for you.”

During high school, Miller said Dewey’s Drug Store was the popular hangout. “It was known for its cherry Coke and the Colonial Restaurant for hamburgers,” he said.

Brown Rock also remembered Dewey’s. “They had booths and Mr. Dewey didn’t like the kids to get too loud,” she said. “I don’t remember spending much time there however I had many after school hot-fudge sundaes at the Parkette.”

Todd Tennies, of Tennies Ace Hardware, said the impact the memories people have of shopping 50 years ago in downtown West Bend is still a big part of the community today.

“Locally-owned businesses employ people that live in our community and the staff is well trained in product knowledge and customer service,” said Tennies. “Shop Small Saturday is a golden opportunity to be recognized and supported.” Small Business Saturday is Nov 29.

Connie Willer I loved growing up in West Bend! Favorite Christmas memories have to be the Nativity in front of Amity and midnight mass at St. Mary’s. Mr. Class would play “The Little Drummer Boy” and ” Do You Hear What I Hear” on the marimba, unforgettable.