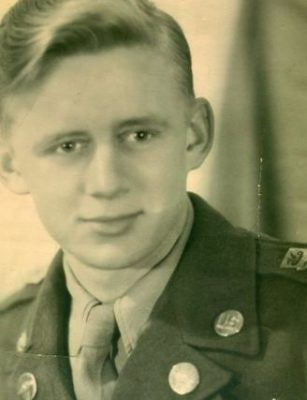 Whitey was born on July 19, 1928, in Barton, the son of the late Allen and Bernadina (Tina) (Stellpflug) Rick. On June 15, 1950, he was united in marriage to Harriet Schroeder in Crown Point, Indiana.

Whitey grew up in Barton.  He proudly served his country in the U.S. Army during World War II.  In 1960, he took over the family business and operated Rick’s Tap in Barton for the next several years.  Whitey was also a volunteer fireman for the Barton Fire Department.  He was employed at Mercury Marine in Fond du lac and retired in 1991.

Whitey enjoyed hunting and fishing with his sons.  He loved his children, grandchildren and great grandchildren, his pets, sweets of all kinds, long rides in the car, and mostly his dear wife Harriet.  His presence was bigger than life; the world will be a lot less interesting with his loss.

A funeral service for Whitey will be held at 1:00 p.m. on Friday, September 22, 2017, at Myrhum Patten Miller & Kietzer Funeral Home, 1315 W. Washington Street, in West Bend. Rev. David Schoob will officiate and entombment will follow in Washington County Memorial Park in West Bend.

Whitey’s family will greet relatives and friends at the funeral home on Friday from Noon until the time of service.

Whitey’s family extends their heartfelt appreciation to the Clement J. Zablocki Veterans Association Hospital in Milwaukee for the tremendous care they provided.