Obit: Catherine L. Schickert, 84, of Kewaskum. Catherine was employed by Regal Ware Inc. in Kewaskum and was a member of the 25-Year Club. 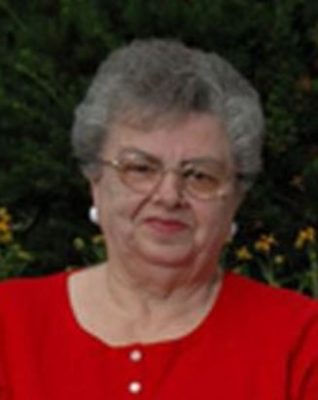 Feb. 13, 2017 – Kewaskum, WI – Catherine L. Schickert, 84, of Kewaskum, entered eternal life on Friday, February 10, 2017, at Kettle Moraine Gardens in Kewaskum, surrounded by her loving family.
She was born on June 20, 1932, in the town of Addison, the daughter of the late Emil and Margaret (nee Doll) Schmidt, and on September 8, 1951, she was united in marriage to Mathias Schickert at St. Peter and Paul Catholic Church in Nenno.
Catherine was a member of Holy Trinity Catholic Church in Kewaskum. She was employed by Regal Ware Inc. in Kewaskum retiring on August 4, 1990, and was a member of the 25-Year Club.
Catherine will be remembered for her love of quilting, bingo, polka music and Friday Fish Fry’s from J.O.’s.  Her greatest joys came from spending time with family.

Those Catherine leaves behind to cherish her memory include her children, Eugene (Linda) Schickert, Tom (Angela) Schickert, Randy (Diane) Schickert, and a daughter-in-law, Cindy Schickert; all of Kewaskum, Lucy (Harvey) Braford of Oakfield and LuAnn (Don) Schrauth of Montana; 14 grandchildren; 16 great-grandchildren; four brothers, Wally Schmidt, Joe Schmidt, Ralph (Joyce) Schmidt and Ray (Betty) Schmidt; a sister-in-law, Alice Schmidt, nieces, nephews, other relatives and friends.
In addition to her parents and husband, Catherine was preceded in death by a son, Allen Schickert; a granddaughter, Jennifer Schickert; an identical twin sister, Lena (Eugene) Wiedmeyer; a brother, Leander Schmidt and parents-in-law, Clarence and Gertrude (nee Kedinger) Schickert.
A Mass of Christian Burial for Catherine will be held at 6:30 p.m. on Wednesday, February 15, 2017, at Holy Trinity Catholic Church in Kewaskum with Father Edwin Kornath and Father Mark Jones co-celebrating. Entombment will be held at 10:00 a.m. on Thursday, February 16, 2017, at Shrine of Rest Mausoleum in Fond du Lac.
The Schickert family will greet relatives and friends at the church on Wednesday from 4:00 p.m. until the time of Mass.
In lieu of flowers, memorials to Holy Trinity Catholic School are appreciated.
The Schickert family extends their heartfelt appreciation to the staff of Kettle Moraine Gardens and Serenity Hospice for the compassionate care provided to Catherine.

The Myrhum Patten Miller & Kietzer Funeral Homes have been entrusted with Catherine’s arrangements.